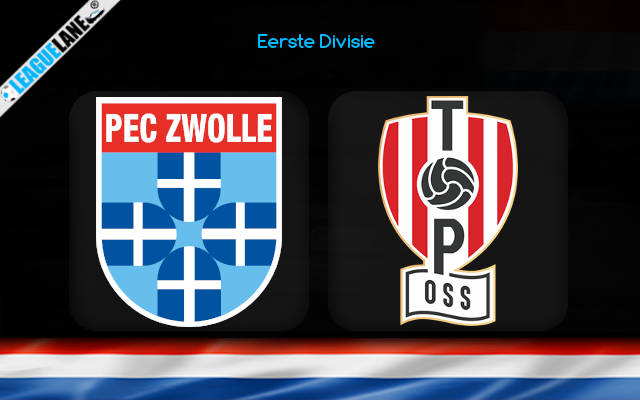 PEC Zwolle vs TOP Oss Predictions and Free Tips from our expert tipsters when the teams go head-to-head in Eerste Divisie on Friday, 27 January 2023.

After being knocked out of the KNVB Cup, Zwolle made amends by winning two games by displaying good defensive skills. They managed to defeat their rivals Heracles a few days back. Now they will clash with bottom-side TOP Oss.

Things are not looking good for TOP Oss, barring the 2-1 win against Telstar earlier this month, they are on a four-game winless run. Manager Marcel van der Sloot is concerned as his team have received two red cards in their recent two matches.

Zwolle demolished this opposition by 5-0 back in November. They have a good record against Top Oss as they have won three of the last four head-to-head matches.

At this ground, it has been more than eighteen years since the last time TOP Oss celebrated a win against this team.

Who will win the match between PEC Zwolle and TOP Oss?

We can expect Zwolle to take all three points from this game. The main reason is that they are in excellent winning form in the league. Not to mention that they are at the top of the table. Another important reason to note is that Top Oss have not won an away game since September.

Oss have scored goals in all of their January fixtures till now. At the same time, Zwolle have scored at least two goals in their last three league wins. Considering all of this it will be a wise decision to back on both teams to score in this fixture.

The host have won all of their home matches starting from November and have won this fixture on numerous occasions in the past. You can back the following, as our first tip is that PEC Zwolle to win and BTTS– at 2.75 odd.

Next up, our second tip is that the Correct Score will be PEC Zwolle 3-1– the odd for this tip will be at 11.00. Against teams that are at the bottom half of the table, the host have scored three goals this month. Also, Oss have scored at least one goal in all of their January fixtures.