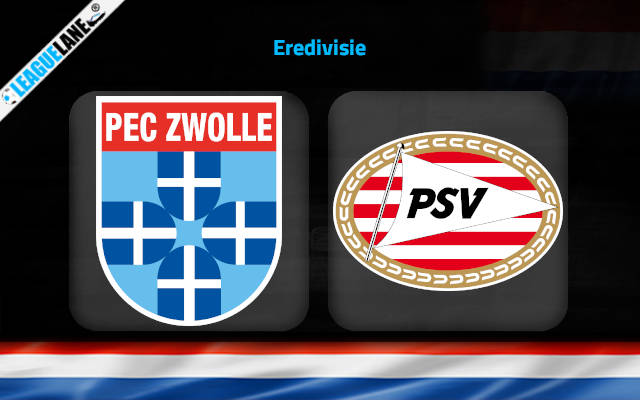 With only one game remaining to end this season, PSV Eindhoven will take a roadtrip to Zwolle hoping to end it on a high note. These two sides will cross swords at MAC³PARK Stadion, this Sunday.

PSV Eindhoven is at the 2nd spot on the standing with 78 points from 33 games. They won 25 times in the league while drew on 3 and lost on 5 other occasions. Lacking just 4 points, they gave the Eredivisie title to Ajax this season after falling off from an impressive dominance at the start.

PSV will come into the encounter following on from a 3-2 Eredivisie win over NEC in their previous outing. Momentum is really building for them as they have now gone 11 games without losing.

On the other hand, PEC Zwolle resides at the rock bottom closing the 18th position on the table with a mere 27 points. Of the 33 matches played, they won only 7 times in the league while drawing on 6 and losing on 20 other occasions. The have already accepted their fate for relegation to Eerste Divisie and they will be playing this game purely for their pride.

The hosts will be hoping for a better result following a 0-2 league loss in their previous game against Sparta Rotterdam. Things have not been going that well in front of goal for them recently, with the side failing to score in 2 of the last 5 games.

PSV has been a dominant force, winning the last 14 h2h games in a row. They are also unbeaten in their previous 11 league matches away from home. Moreover, they have lost only on two away games this season which itself is remarkable.

Meanwhile, Zwolle haven’t beaten this visitors in their previous 6 home h2hs. They remain as the second worst side this season to perform at home.

Knowing that, we expect PSV Eindhoven to seal a win against this Zwolle on Sunday.