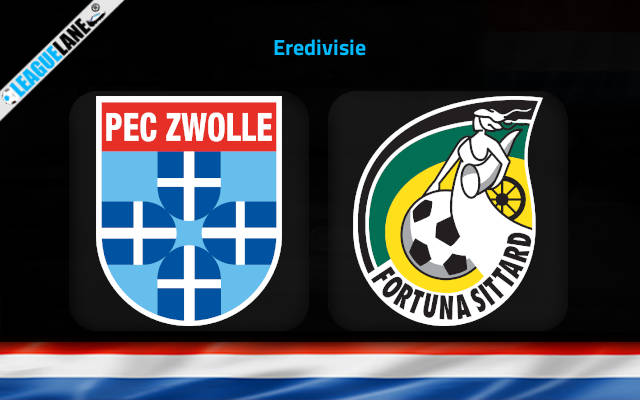 This is the clash between the worst attack and the worst defense in the league. The hosts have scored only 8 goals so far in the season, but the clash against Fortuna Sittard should really provide them a great chance to improve such a dreadful record. The visitors allowed as many as 39 goals in the opening 15 league fixtures this season.

PEC Zwolle will come into this undefeated in the last two league games.

Fortuna Sittard lost all of the last six Eredivisie matches.

Fortuna Sittard have the worst defense in the league with 39 goals allowed in 15 matches.

Bottom two Eredivisie sides are set to take on each other in the 16th round of the competition on Saturday evening at MAC PARK Stadion.

This is a huge game for both teams who have been struggling badly to stay competitive in the elite class of Dutch football this season.

The hosts have won just one match since the beginning of the 2021/22 Eredivisie campaign.

They are the only team in the league to have changed a manager so far in the season as Dick Schreuder took over Art Langeler on the bench in mid-November.

While Zwolle had 1 win, 1 draw, and 11 losses after the opening 13 rounds, they managed to add a couple of draws to this tally, holding RKC Waalwijk and Groningen to back-to-back draws in the last two rounds.

Schreuder can actually be thrilled with how his men looked in the 1-1 draw at Groningen last Friday as they allowed the rivals no more than a single shot on target in the 90 minutes of the affair.

On the other side, we have Fortuna Sittard who will come into this off the back of six straight league defeats.

Moist of these have come against some of the best teams in the division as we can blame tough schedule for such a negative run.

However, nobody can deny that Fortuna have been shipping way too many goals of late.