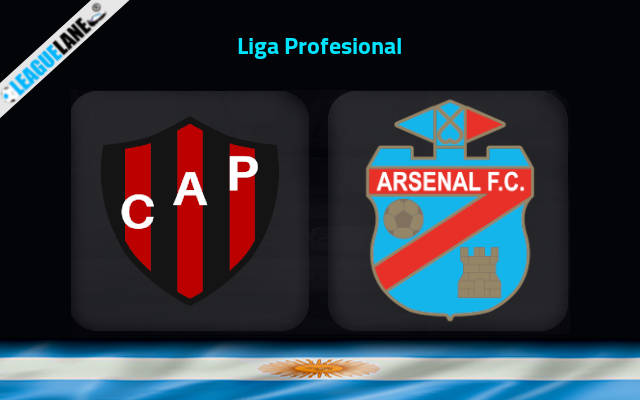 Gameweek 7 of Liga Profesional is set for this weekend as Patronato play host to Arsenal Sarandi where both these sides are separated by just a point and a place. These two teams will be seen clashing at Estadio Presbítero Bartolomé Grella this Saturday.

Patronato is at the 14th spot on the standing with 8 points from 6 games. They won, drew and lost 2 games each in Liga Profesional. The home side has scored in the last 3 games in front of their own fans while also having failed to score in 5 home matches this season.

The hosts prepare for this fixture coming off the back of a 2-2 Superliga stalemate over Newell´s Old Boys. Patronato have seen their defense breached in 5 of their previous 6 games, letting in 9 goals along the way. In their last 5 matches, 3 of those games has ended with both teams scoring.

On the other side, Arsenal Sarandi resides at the 16th position on the table with 7 points. Of the 6 matches played, they won and lost a game each while having drawn on 4 other fixtures. Momentum is really building for them as they have now gone 5 games without losing.

The visitors come into this match following on from a 2-1 Liga Profesional win over Estudiantes in their most recent outing. Looking at their form, and Arsenal Sarandi have been scored against in 5 of their last 6 matches, letting opponents get 8 goals in all due to their frailties exposed in the backline.

Patronato remain unbeaten in their last 4 home league matches and has never lost a home game in Liga Profesional. It’s likely that the hosts will score today, as they have netted in the last 4 games coming into this one and have scored 9 goals in the last 5 games.

Meanwhile, Arsenal Sarandi have won just 4 of their last 28 matches in Primera Division. They have been drawing games in huge numbers.

Since 4 of their last 5 h2hs have ended on draws, we feel that Patronato win or draw seems to be the best option here.