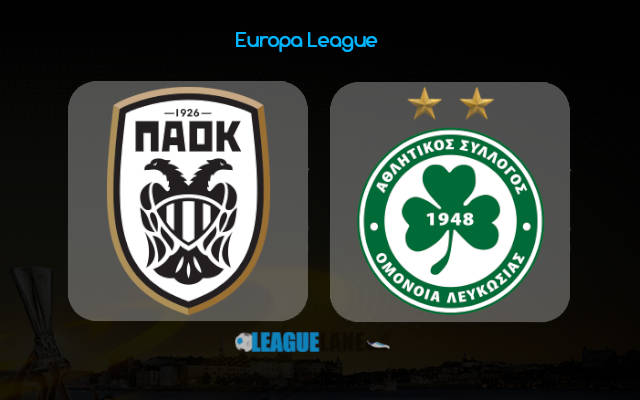 PAOK have been very close to secure a spot in UEFA Champions League group stages, but unfortunately got defeated in the playoffs by Krasnodar.

This Greek team has been playing very entertaining football lately, with majority of their European journeys ending with three goals or more – their last seven games to be precise.

As for their opposition, Omonia Nicosia are debutants in Europa League group stages and initial prognosis for their first match is not that great. PAOK are favorites for the win, currently priced at 1.80 odds.

The Cypriots have caused a couple of upsets in the last couple of months though. Can they pull another one?

There were no previous head to head games between PAOK and Omonia Nicosia.

Champions of Cyprus have had very successful campaign in UEFA Champions League qualifiers even though they haven’t reached the group stages. They were big underdogs twice in a row, but managed to knock out Legia Warszawa and Red Star Belgrade. Both of these games were not decided in 90 minutes – had to go into extra time and penalties.

Overall, this squad loves to park the bus and lurk for an opportunity through the counter attacks. Expect to see something like that in Thessaloniki.

PAOK’s start in Greece Super League could have been much better. The Vultures have collected only nine points from opening five games. They are still undefeated, but draws against Atromitos, Volos and AEK can hardly be called a success.

We shouldn’t forget that PAOK eliminated Benfica and Besiktas in UCL qualifiers this year. Many eyes are pointed at direction of 16-year old striker Georgios Koutsias who looks promising. Top goal scorer at the moment is Karol Widerski.

We are expecting to see dominant performance and an easy win for the hosts in Greece. PAOK to win is going to be one of the most popular picks this Thursday that is for sure. If you are feeling a bit more adventurous, you can also pick hosts to win both halves at huge 5.50 odds.