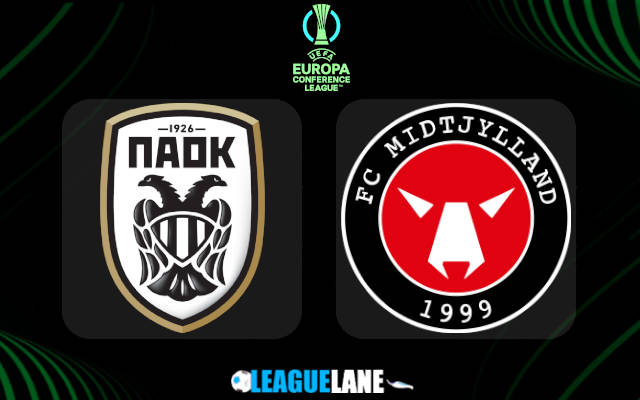 The second leg match between PAOK and Midtjylland in Europa Conference League will take place in Tessaloniki on Thursday.

Midtjylland won the first leg at home. The hosts scored their goal in the first half of the match and didn’t give the opposition a chance to score against them. The match ended with 1-0 FT score.

PAOK played against Ari in their last match in Super League 1. Both teams failed to score in the match, ending the game in a goalless draw.

Midtjylland played their latest match against AaB in Super Liga. AaB scored two golas in the match while Midtjylland scored none. The match ended with 0-2 FT score.

PAOK has played well in their matches this season. Looking at the league matches, they are one of the top contenders Super League 1. The team sits second on the league table with 48 points. The team is unbeaten in their last ten matches and secured wins in eight of them as well.

Midtjylland is one of the top contenders in Super Liga. The last match against AaB was the first league match they played since November, which ended in a loss for them. In their league table they are in the second position and has got 35 points from 18 matches. Looking at their matches in all competition, the team has got mixed results in them. They will look to gain a steady streak from their upcoming matches.

PAOK will face Midtjylland in their second leg with a determination to gain the win. They will have the support of their fans in their home ground acting as an anchor for them.

PAOK will be a tough team for the Danish team to break in their home ground. They have not lost in their last ten home matches and will look to keep the streak going. Even though Midtjylland has scored in away matches, it won’t be as easy as they will hope in a club international.