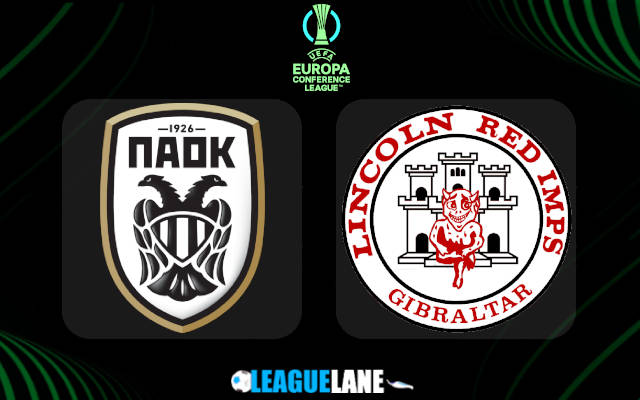 PAOK will go into this on a dreadful run of form with five successive winless affairs across competitions. The latest defeat came on Sunday afternoon when they conceded three goals away at Ionikos.

However, the gulf in quality between Greek teams and Gibraltar’s champions is enormous and the only question here is how many goals will end up in Lincoln’s net on Thursday.

PAOK picked up a 0-2 victory in the first head to head encounter against Lincoln Red Imps.

It was placed in mid-September this year when Chuba Akpom and Alexandru Mitrita bagged goals in Gibraltar.

PAOK will be searching for a comprehensive victory over the rock-bottomed Lincoln Red Imps on Thursday evening as they hope to secure the second place in Group F of the UEFA Europa Conference League.

The two teams can’t catch group winners Copenhagen who are four points adrift at the top, while the last-placed Lincoln Red Imps are yet to claim their inaugural point in th3e competition.

Since PAOK and Slovan Bratislava can’t be separated on the head to head record after two draws in their direct clashes, the goal difference will determine the second-place finishers if both teams pick up wins on Thursday.

Slovan Bratislava currently beat PAOK on goal difference by a single goal (+3 to +2), but PAOK have a much easier fixture on the final day.

Since Lincoln Red Imps are by far the weakest team in the entire competition, we have plenty of reasons to expect a dominant display from the Greek side here.

Lincoln lost all five matches with a total goal difference of 2-15 along the way. They clearly have nothing to hope for against highly-motivated PAOK on Greek soil on Thursday night.