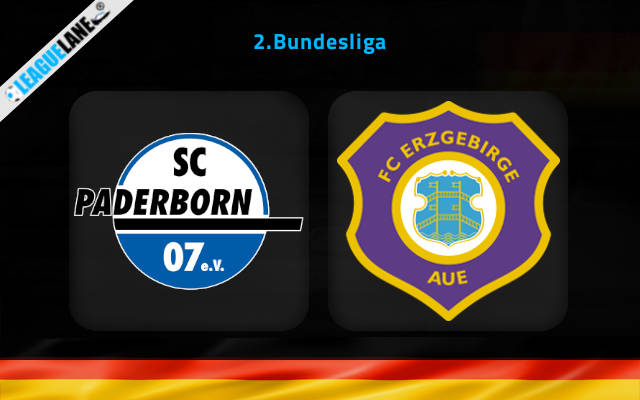 Paderborn are unable to secure a victory for the past 4 league schedules while losing on twice of them. They are level on points with Karlsruher in the league but has better goal ratio than the latter. Erzgebirge Aue is at the bottom of the league and they are terrible as of recent, as they lost the last 4 games in a row. It has been over 9 games since they have last seen a victory. Hoping to turn the tables, the visitors travel to Benteler Arena this Friday for the 24th round of 2. Bundesliga.

The hosts are at the 8th spot on the standing with 32 points from 23 games. They won and drew 8 matches each while losing on 7 other occasions. They scored 38 goals in total while conceding a sum of 30 till now in the league.

Paderborn suffered a 0-2 defeat in their last game at the hands of Schalke which came after their back to back league draws. They have failed to prevent opponents from scoring in 5 of their previous 6 games, giving up 11 goals in the process.

On the other side, Aue resides at the bottom closing the 18th position on the table with a mere 15 points. Of the 23 matches played, they won only thrice while drawing 6 times and losing on 14 other occasions. Their total goals to conceding ratio stands at 20:45 which is the worst in 2. Bundesliga, showing their dreadful lineup.

The visitors lost the last league fixture to Dusseldorf marking their fourth loss in succession. In a total of 5 out of the previous 6 games featuring Erzgebirge Aue, 3 or more goals have been hit. The average goals scored per game during that time for Erzgebirge Aue is 1.

Aue have not emerged victorious against Paderborn when they have played them away from home in the previous 5 matches in the league and have not won on road since their last 4 league games. Hence, we anticipate a win for the hosts this Friday.