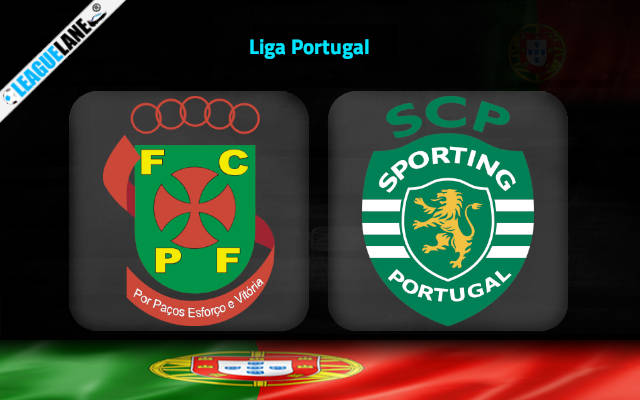 Pacos Ferreira are in 10th place but their form has really dropped and although they have lost just one game in their last five they have drawn 4 of their other games this includes drawing their last two in a row.

This form has meant Pacos have dropped 9 points off a European place. At home the club have drawn their last 3 in a row with just 1 victory so far, their last home game finished in a 0-0 draw against Arouca. Currently Pacos have drawn 50% of their games so far.

Sporting Lisbon come into this game in 2nd place and are unbeaten with 8 wins and 2 draws so far and they will be easily the favourites to win this game.

Sporting have won their last 5 games in a row and their last match finished with a 1-0 win over Vitoria. Away from home Sporting have played 4 games and won 3 and drawn 1.

This should be an end to end game as for sure Sporting are the better team but Pacos always raise their game for the bigger sides. Even though there is a difference in attack for the sides Pacos are not losing many games lately and that has to be respected and they are at home.

Overall Sporting should have too much quality in the end but they are odds of around 1.50 to win the game which could be too short for some people, so it is best to look into different markets.

One of our main choices will be to back the over goals market though as Pacos will not be afraid to take some chances and come forward.