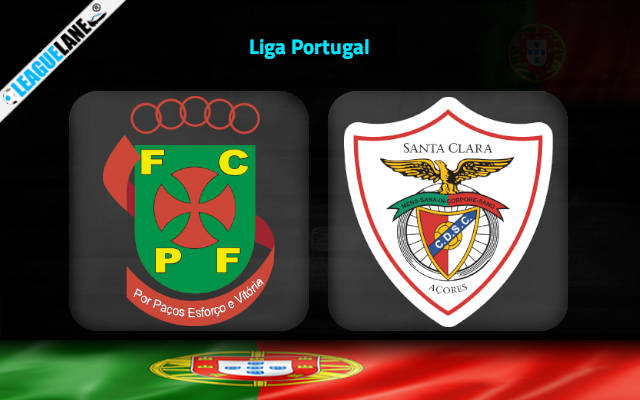 Both Pacos Ferreira and Santa Clara enjoyed new-manager-bounce wins in the previous round of Primeira Liga.

Pacos Ferreira saw off Tondela 0-1 on the road in the first game in charge for new manager Cesar Peixoto, while Santa Clara’s caretaker manager led the team to the 1-0 home win over Vitoria Guimaraes in their first game without Nuno Campos.

The two outfits are separated by just one point in the bottom half of the league standings and we have reasons to expect big tensions on the pitch when they come across each other on Thursday afternoon.

Pacos Ferreira thus ended a dismal run of five subsequent defeats in all competitions. The new head coach was pleased to see his team keeping a clean sheet in the clash at Tondela.

The hosts will try and make it two on the trot here against Santa Clara who have been struggling badly to perform on travels so far in the season.

The visitors drew two and lost five of seven league outings on the road in this term of Primeira Liga.

Santa Clara conceded 12 goals in the last three fixtures away from home in all competitions.

The visitors own the joint-worst defense in the top flight of Portuguese football with 30 goasl allowed in 15 games so far in the season.

Pacos Ferreira finally arrested their slump in form with the narrow victory at Tondela last time out. We see them as favorites against one of the worst travelers in the division.

If you add the head to head record to the mix, the home win is well worth backing at the 2.50 odds. You can alternatively try with Pacos Ferreira to score two or more goals at the 2.62 odds.