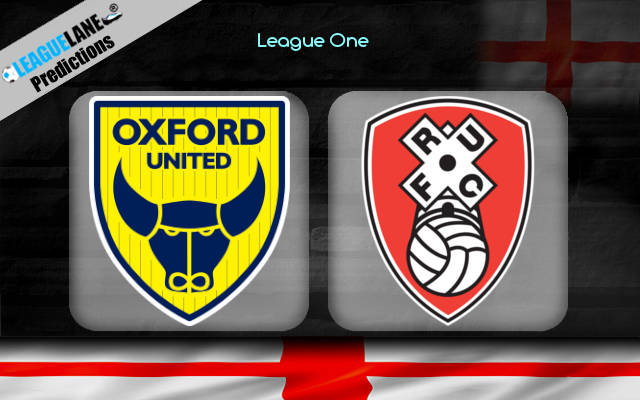 Both the teams are on fire while considering their recent form, having won 4 of the last 5 matches. But the visitors are at the table top, in the zone of Championship promotion. The hosts take on the table toppers this Sunday and hope to climb up the table as they welcome them to Kassam Stadium.

Rotherham is at the 1st spot on the table with 37 points. They have lost only 3 times in the league while drawing another 4 games. Of the 18 matches played they won 11 of them. They have the highest goals to conceding ratio on the table at 34:13.

Coming into this game, they has picked up 13 points from the last 5 games, both home and away. That’s 2.6 points per game on average. They are currently on a run of 15 unbeaten games till now.

The visitors are just below the zone of Play-offs in the 7th position gaining 31 points from 17 matches. They won 9 matches while the number of draws and losses stands at 4.

They have also picked up 13 points from the last 5 games, both home and away with 2.6 points per game on average. They are undefeated in 5 of the last League One games.

Scoring is not an issue for Paul Warne’s team when they play away from home. They have scored in the last 7 games they have played on the road. Michael Smith stands at the second spot in the top scorers list contributing 12 goals for the Millers.

Previous matches between the two have averaged 4.4 goals while BTTS has happened 100% of the time. The home team will have to work hard as a team to get anything against the visitors lineup who we think might do enough to score at the other end and edge ahead. A close win for the table toppers is expected.