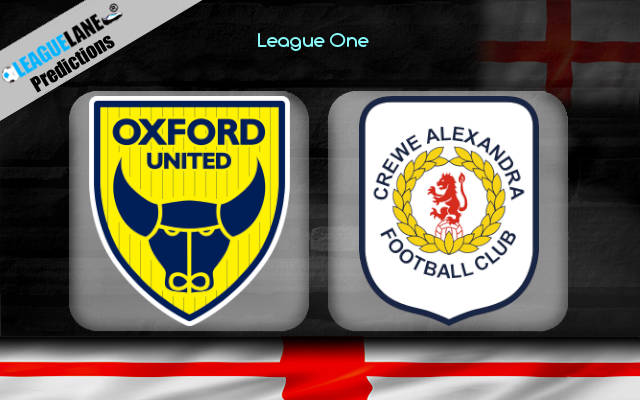 Oxford United will be keen to make the home advantage count when they welcome Crewe Alexandra on Tuesday.

The Yellows finished last season but failed to replicate the kind of form and consistency this season and currently sit at 21st on the log.

To their defense, they played only 9 games so far, 2 less than other teams, out of which 6 are on the road. The home record looks decent as they won 2 after losing to Sunderland on matchday 2.

Crewe are 13th in the table, do lack the consistency as well. They lost 6 of the 11 games so far, 3 of them came in the 4 played away from home.

So, both teams will be desperate for a win and this is why bookies do not see a clear favourite in this match. The hosts are priced at high 2.20 odd to win, while draw and away win are priced in the region of 3.30 odd.

There have been a total of 9 overall head-to-head meetings between Oxford United and Crewe Alexandra and and with the latter leading the stats with 4 wins, 2 losses and 3 draws.

Now, 7 of those 9 fixtures saw both teams scoring and there have been over 2.5 goals in 5 of them.

This can be a tight match to be honest, but we cannot overlook the quality possessed by the hosts and they are capable of turning the fortunes. Also, they are strong at home and defeated Rochdale 3-1 and MK Dons 3-2 in the latest two league games.

This is why we are backing an outright home win on Tuesday, also taking into account Crew’s poor scoring form in away games as they scored in just one of the four away games so far.

Meantime, the correct full-time score 2-0 in favour of the home team as well as backing them to score at least twice here looks like decent options.