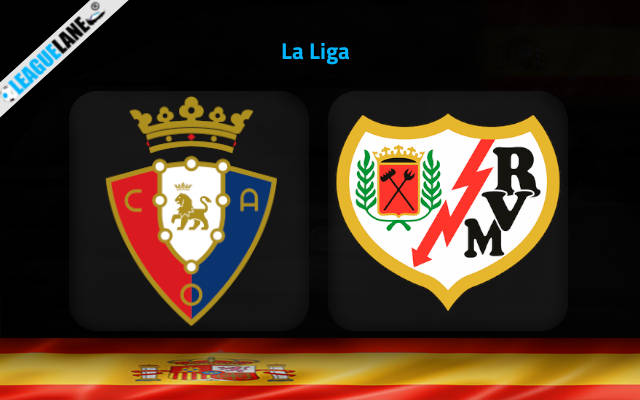 Osasuna will be looking to maintain the perfect record on the home patch on Sunday afternoon when they host Rayo Vallecano in the fourth round of La Liga.

The team led by Jagoba Arrasate won the opening two home fixtures of the season against Sevilla and Cadiz, netting two goals in each of the victories.

They then suffered the maiden loss of the new campaign last Friday, falling 1-0 away at Real Betis. Los Beticos scored the only goal of the game from their lone shot on target on the occasion.

Arrasate can be satisfied with his team’s defensive showings at the beginning of the season. His Osasuna will have a nice chance to keep this fine form going here against Rayo Vallecano who have suffered their first loss of the season last weekend at home against Mallorca.

Rayo rely on defense very much under Andoni Iraola. They have been extremely tough to break down even in preseason friendlies and they transfer this form into the opening two outings of the new La Liga campaign.

Rayo kept their net untouched against the likes of Barcelona and Espanyol, both on the road. However, they then disappointed the fans with a 0-2 loss to Mallorca in the first home match of the season eight days ago.

It is worth noting that Rayo Vallecano have failed to register an attempt on target in the defeat to Mallorca.

Both Osasuna and Rayo Vallecano look very hard to break down and we can hardly imagine a high-scoring scenario when they come across each other in Gameweek 4.

The Under 2.5 goals FT has to be the way to go at the 1.61 odds. We also like the 2.00 odds offered for the home win bet knowing that Osasuna have won both home matches so far in the season.