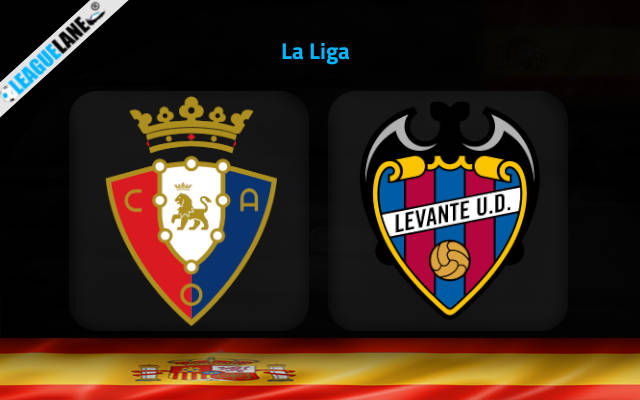 Levante earned a glimmer of hope in their battle for avoiding relegation in late-February when they managed a streak of two wins and a draw in three La Liga games.

However, they went on to collect only one point in the last two league affairs in March and now again have a mountain to climb to reach Granada who are six points away in the safe zone.

The team led by Italian manager Alessio Lisci will be looking for salvation points on Saturday afternoon in Pamplona where they will face mid-table Osasuna in the 29th round of La Liga at Estadio El Sadar.

The stakes are much lower for Osasuna who can hardly go anywhere (either in the battle for the European positions or the relegation battle) in the remaining ten games of the campaign.

Osasuna suffered a tough 4-0 loss to Barcelona at Estadio Camp Nou on Sunday. It was the third defeat in the last four league matches for Arrasate’s troops.

It is worth noting that Osasuna kept their net untouched in three of the last four La Liga fixtures at Estadio El Sadar.

They have done it against the likes of Cadiz, Sevilla, and Villarreal, meaning there is absolutely no reason for them not to repeat it here against the last-placed Levante.

The visitors have improved their defensive performances lately (at least compared to the horrendous first half of the season) as they kept clean sheets against the likes of Atletico Madrid and Elche (within the previous five rounds).

Knowing that seven of the last eight head to head meetings between these two rivals ended with fewer than three goals, we are more than happy to take the 1.72 odds offered for the Under 2.5 goals FT pick here.