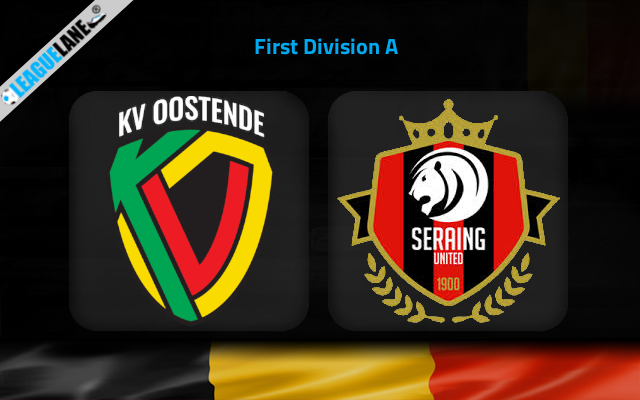 Oostende recorded a 1-1 draw against Union Saint-Gilloise on road in their most recent league fixture to record their third unbeaten fixture of the past 5 league fixtures. The above competitive display against the current table toppers on road will be giving enough of spirits to enter their next fixture.

Meanwhile, Seraing with dreadful recordings since the beginning of the league, sits inside the relegation spot. They have one of the worst defensive and the weakest offensive side of this season. They will be having lack of motivation and we quite don’t find anything impressive from this side.

Seraing were last seen playing a 1-1 draw at home against Leuven. It was their 8th winless fixture of the past 10 league affairs. 6 of them were completely negative outcomes. Following such a set of recordings, they will be having lowest of spirits.

By the looks of things, we expect Oostende to seal a win from this Seraing outfit when they meet at Diaz Arena in a Jupiler League fixture.

Oostende are unbeaten in two of the past three league affairs at home. Such a set of display will not look that impressive but when facing Seraing it counts much.

Oostende have also scored in 6 of the past 9 home fixtures. However, we can see them leaking goals in some of them.

On the other side, Seraing have only two wins of the past 10 on road fixtures. They lost the rest 8 fixtures. We can also see them leaking two or more in 7 of those 10 fixtures on travels.

Analyzing the above stats, we expect KV Oostende to be on the winning side when the referee blows the final.