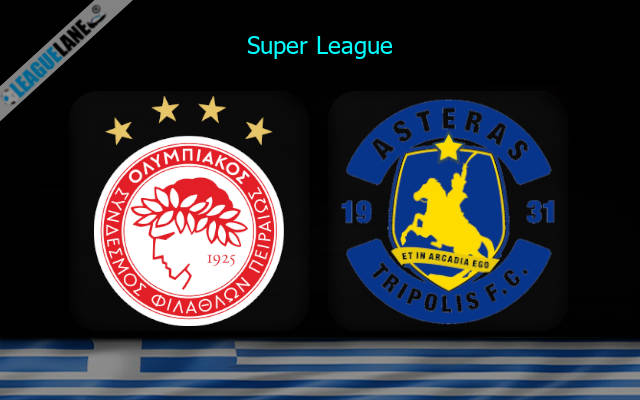 Olympiacos vs Asteras Tripolis Predictions and Free Tips from our expert tipsters when the teams go head-to-head in the Greece Super League on Wednesday, 28 December 2022.

The hosts are priced at just 1.33 odds to claim the spoils here by the bookmakers. It is very easy to understand why because Olympiacos have had a decent run so far in this campaign unlike their Wednesday’s rivals Asteras Tripolis.

Asteras are at 9th spot in the league standings and are trailing 12 points and five spots behind Olympiacos at the moment. They have an inconsistent form at present and have won just once in the last 8 league outings.

Olympiacos have been the dominant force in the recent history of this h2h match-up. They are on a 23-fixture unbeaten streak against Asteras Tripolis.

At this stadium, they are on a six-fixture winning streak against Asteras. Olympiacos had netted in a total of 23 goals in the last 10 h2h clashes against Asteras here.

Who will win the match between Olympiacos vs Asteras Tripolis?

Olympiacos have a 100% unbeaten record against Asteras at home. They have been exceptional when facing this opposition for the past many years.

Going on, Olympiacos have only lost once at home so far in this season. On the other side Asteras Tripolis are yet to seal a win on the road. In that case, expect a victory for the hosts Olympiacos on Wednesday.

Affairs including these two have generally been low-scoring affairs. More than 60% of the matches played by these two sides saw goals under 2.5 ft.

Therefore, we don’t expect an over 2.5 goals ft scenario at Georgios Karaiskakis Stadium on Wednesday.

Olympiacos have managed to seal clean sheets in three of their last four home encounters. Since Asteras have failed to score in two of the last four away matches, we quite don’t see a both teams scoring display here.

Considering all these observations, we like to place a 1-0 win for Olympiacos as the main bet here at 5.00 odds.