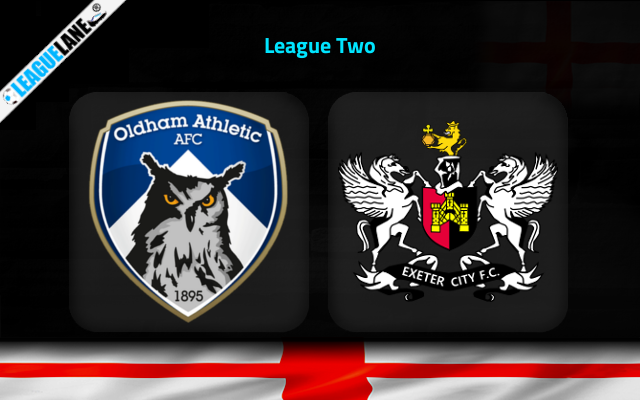 Exeter will be eyeing for a top three spot which is currently one point away from them. They sits 5th on the table with a total of 61 points collected from 35 league fixtures. They owns a strong offensive and defensive lineup.

Exeter recorded a 2-1 win against Crawley at home in their most recent league fixture. With that win, they are now having an unbeaten streak for three league fixtures. They will be hoping to make it four.

Meanwhile, Oldham are not pulling up any trees since the beginning of this season. As a result, they are pushed down to the 23rd spot on the table, inside the danger zone. They possess the second worst defensive lineup this season.

By the looks of things, we expect a pleasant display from Exeter against this Oldham outfit in their coming League Two fixture at Boundary Park on Saturday afternoon.

Oldham have been bettering their form at home lately. They have managed to record a couple of wins at home of late. Their attacking side have scored goals in each of their past three home league affairs.

On the other side, Exeter have won three of the past five league fixtures on road. They have scored goals in each of those 5 on road affairs. With that form in trend for them, we can’t expect nothing short of a win from them against Oldham.

Knowing that they have a good h2h record against Oldham, we have more than enough reasons to back Exeter to record a positive display.