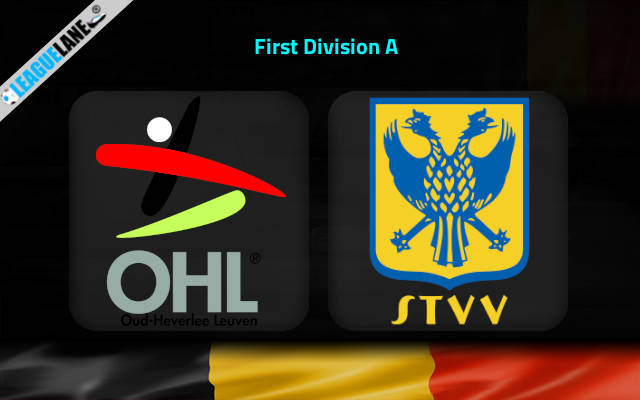 OH Leuven vs St.Truiden Predictions and Free Tips from our expert tipsters when the teams go head-to-head in Belgian Jupiler League on Saturday, 28 January 2023.

Only twice have St. Truiden lost on the road this season in the Belgian top flight, and both of these defeats came against teams currently placed in top-five of the table.

Meanwhile, Leuven have a single win to their name at home since the first week of September, and this sole victory came against the dead-last placed Seraing.

Who will win the match between OH Leuven and St.Truiden?

Leuven won just once at home in the last four months, and this victory came against Seraing – who are placed bottom-most in the table.

On the other hand, Truiden have the better h2h record over the past two decades, and importantly they have been one of the best teams away from home this season in the Jupiler League. In fact, since January of 2022, they lost just twice on the road.

It certainly looks like St. Truiden are on a course to deliver a winning performance.

10 of the past 15 h2h clashes had three or more goals, while the last Leuven kept a clean sheet was three months back. They also let in seven goals from their past three appearances at home.

In addition, Truiden have a single clean sheet to their name in the past four months on the road.

As these two lock horns this weekend at the Den Dreef, chances are high for goals to come in plenty.

Continuing from before, Leuven found the back of the net at least once in nine of their past ten games, and only thrice did they fail to do so at home since May of 2022.

Going on, Truiden slotted in at least one goal in all but one of their fixtures in the past three months. And most importantly, 11 of the former 16 h2h clashes had goals from either side of the pitch.

The chances of both teams finding the back of the net is quite high this weekend.

Truiden have the better h2h record over the course of the past two decades, and they easily have been one of the best teams on the road in the Belgian top flight. In the past 12 months, they faced losses away from home just two times.

On the other hand, Leuven were winless in 10 of their past 13 overall fixtures. And their only win at home in the last four months came against the relegation-threatened Seraing.

Likely, chances are quite high for a St. Truiden win this Saturday – and the odds for the same are placed at an attractive 3.00.

Going on, goals have always come in plenty in past h2h clashes. 11 of the former 16 h2h meetings had goals from either side of the pitch, and both teams have kept a single clean sheet each at this venue in h2h meetings, in the past two decades.

With either team struggling with their defense, the Both Teams to Score wager looks very promising at an odd of 1.75.