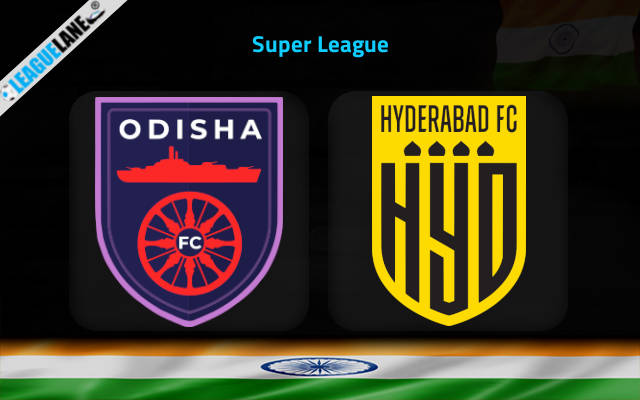 Hyderabad have been comfortably the best team in the ISL so far this season. They are placed atop the table, and their offense has been simply spectacular throughout the campaign.

Meanwhile, Odisha have had issues with their form for quite some time now, and as a result, they are finding it hard to hold a spot even in the mid-table.

And most importantly, they were soundly and humiliatingly beaten in the reverse fixture by this opponent, which is also the biggest defeat for any team in the current edition of the Super League.

Likely, expect another win for the dominant Hyderabadis this Thursday at the Jawaharlal Nehru Stadium.

Odisha were held to a 0-0 draw the last match-day by Mohun Bagan. They were also winless in eight of their former eleven games, and five of these were losses. Do note that they had conceded two or more goals in five of their past eight fixtures too.

On the other hand, the Hyderabadis just registered a massive 0-4 win against East Bengal. They have lost just once in the past eleven fixtures, and this sole loss had come against the second-placed Kerala Blasters.

Going on, Hyderabad have had one of the most consistent offenses in the entire league, and finally, they absolutely demolished Odisha in their latest h2h encounter.

With a 6-1 scorecard, they inflicted the heaviest defeat of the season for Odisha, and embarrassingly the sole goal for the losers were in fact an own goal.

By the looks of things, expect a win for the in-form toppers this Thursday.

Tips for Odisha vs Hyderabad