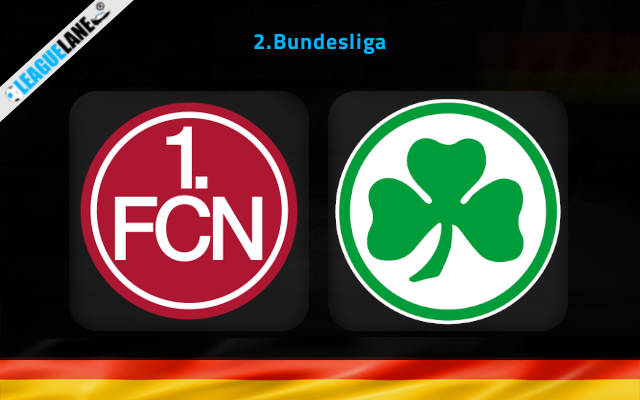 Game week two of German second division football takes place this weekend in one of the most exciting clashes of the round. Nuremberg will be seen hosting Greuther Furth at the Max-Morlock Stadion this Saturday.

Finishing in mid-table last season, Nuremberg seek to get off to a better start this time around in search of promotion to the top-flight. However, they failed to secure a win in the opening game of the season, losing by 2-3 over St. Pauli. That game saw Der Ruhmreiche conceding thrice before first half and they came back to score twice.

Fixtures involving Nuremberg have usually been entertaining affairs of late with a lot of goalmouth action being a real hallmark. Over their past 6 clashes alone, a total of 21 goals have been scored for both teams combined but only 7 of these were netted by the hosts.

On the other hand, after a disappointing season season in the top-flight, Greuther Furth return to the second-tier of German football with new boss Marc Schneider at the wheel. In their last fixture, the Cloverleaves drew 2-2 in the Bundesliga 2 match with Holstein Kiel.

The visitors have been dangerous up front leading up to this encounter, scoring 6 times in their last 6 matches. Having said that, Greuther Furth have been somewhat leaky at the back, having also been scored against in 5 of those same games.

The visitors remain undefeated by Nuremberg when they’ve played them away from home in the last 4 league matches. They also come here on the back of a 2-game unbeaten run on road during their pre-season friendlies.

Meanwhile, the hosts have not won against Greuther Furth in their last 5 matches in the league. Nuremberg are also without a win at home for the past 2 league games.

We however feel that an away win or draw looks as a realistic option here as the visitors have seen drawing games frequently.