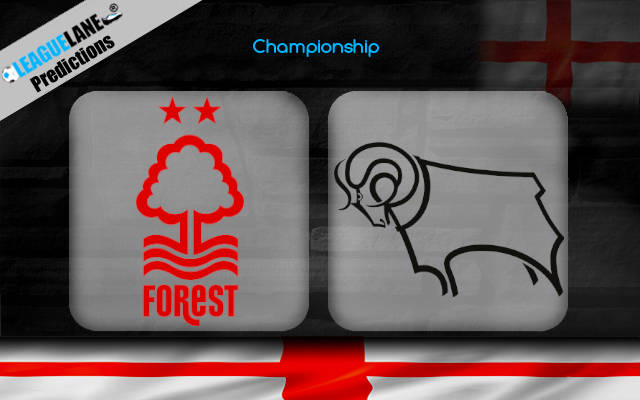 Nottingham Forest have picked up some solid form in the last two weeks, and they will welcome wounded Derby County who are performing under all expectations.

The Rams are just one point above the relegation zone, while having the second worst goal difference in the league of -8.

History says they usually lose games at The City Ground, so 1.95 odds on home victory are not coming as a surprise, despite Nottingham’s inconsistency.

There was grand total of 69 head to head matches between these two clubs with rich history. Nottingham Forest are ahead in terms of victories 26 to 22. They have also won last three games at this venue with total goal difference of 5-0.

The last time they met in July at Pride Park the score was tied 1-1 FT.

Six out of the last seven encounters between The Reds and The Rams ended Under 2.5 FT.

Chris Hughton and his squad had the worst start to new football campaign in the last seven years. Nottingham were defeated in the first four matches while scoring one single goal. However, the signs of awakening are there.

It started with unexpected 1-0 victory on the road against Blackburn Rovers thanks to the goal of Joe Lolley (in the 90th minute), followed with slightly slower performance and a 1-1 draw against Rotherham at home. Building up consistency and form is of crucial importance, especially if Nottm Forest want to compete for playoffs like they did last year.

As for their opposition, Derby County are also going through huge crisis and struggling with efficiency. Not even the presence of Wayne Rooney helps the squad.

The Rams scored only two goals in six games, and unless things change soon, they will be candidates for relegation.

Our first betting recommendation is Under 2.5 FT. As you can see, both teams are not looking dangerous upfront. We wouldn’t be surprised to see a goalless draw.