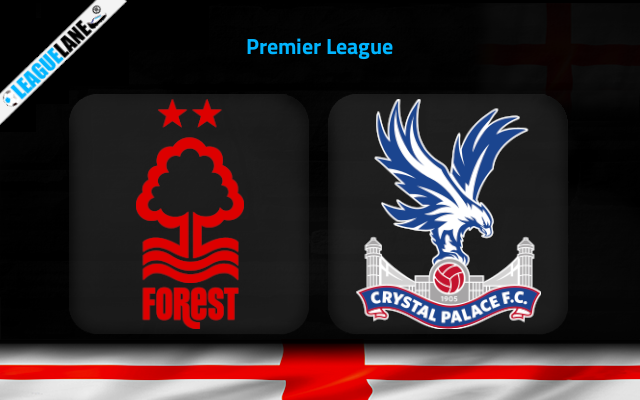 Nottingham Forest come up against visiting opponents Crystal Palace at City Ground in the Premier League tie on Saturday.

The Tricky Trees finished the previous term of English Championship at the 4th position. Further then, they advanced it into the topflight by claiming their spot through the play offs.

Going on, Nottingham is currently on the back of two successive winless outcomes, showing huge problems in an attempt to adapt to the elite class football from the beginning.

Head coach Steve Cooper’s problem lies in his team’s defensive line which had allowed a total of 25 goals in the previous 10 games. The over 2.5 goals option can be placed only considering the goals they have conceded.

It has to be said that they lost most of their games due to the possession of the second-worst defense in the league. The opponents they will face next Saturday are currently sitting 10th in the points table.

Additionally, they are unbeaten in 9 out of 13 games played so far in the season. They are just four points clear of the safe zone currently with a total of 19 points.

Expectation will be high for Crystal Palace who have won the last two games. They will try to achieve a consistency in sealing positive outcomes on the strength of their current form.

They displays their potential in sealing a win by recording five unbeaten games in the previous six league fixtures. They won four of those games too.

By the looks of things, expect a victory for the guests Crystal Palace on Saturday when they meet the hosts Nottingham Forest.

This is a golden opportunity for Crystal Palace to maintain the positive consistency they have in the past two fixtures. The Eagles, who had a slight upper hand against this team even 10 years ago, will find it easy to beat the current Forest.