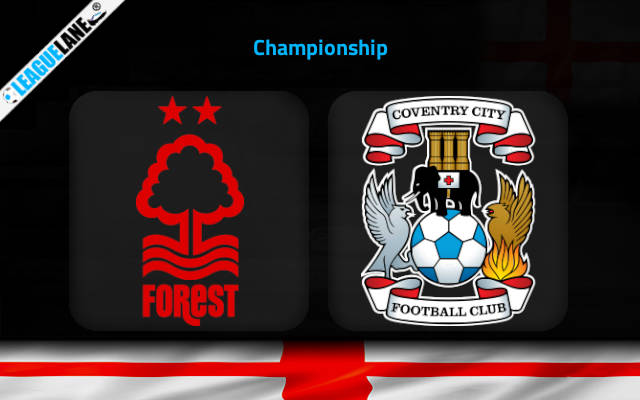 Nottingham Forest are on a 3-game winning streak and hopes to extend their run as they invite the mid-table Coventry City to Ground this Wednesday.

The Reds are at the 7th spot on the standing with 61 points from 37 games. They won 17 times in the league while drawing and losing 10 times each. The hosts are currently unbeaten in the last 8 league fixtures and had secured 12 victories in 18 Championship matches on their own patch, which is pretty good.

Nottingham Forest fans will want a repeat of their previous result, being a 4-1 league triumph over Blackpool. They have seen their defense breached in 5 of their previous 6 games, shipping 5 goals in the process.

On the contrary, Coventry resides at the 11th position on the table with 56 points. Of the 38 matches played, they won on 15 games while drawing on 11 and losing on 13 other occasions. They had gone 10 games without a win on their top-flight travels, suffering 7 defeats along the way, so there should definitely be a shortage of confidence in their ranks.

Previously, Coventry City drew 2-2 in the Championship tie with Blackburn Rovers. The visitors have been scored against on all of their last 6 matches, seeing opposing sides hit 10 goals overall.

Nottingham Forest won 8 of their last 10 games across all competitions. Coming into this, they remain undefeated in their previous 2 league matches at home.

Somewhat incredibly, 18 of the last 22 Nottingham home games in the top-flight have served up a minimum of 4 goals.

Ahead of this meeting, Coventry City have not emerged victorious against The Reds when they have played them away from home in the previous 5 matches in the league.

We feel that a home win is quite likely to occur as the hosts tend to perform their best at home when comparing with the visitors away run.