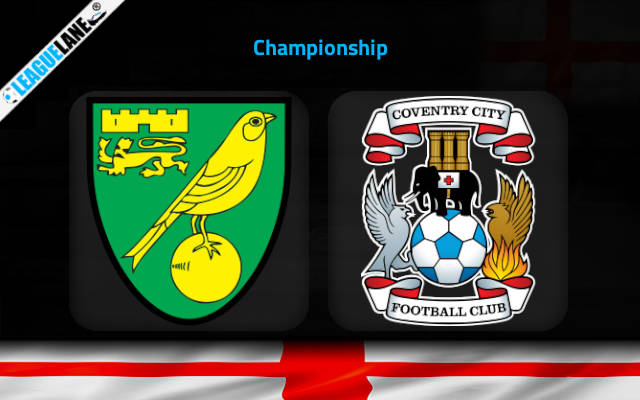 Norwich and Coventry will clash at Carrow Road in a Championship fixture this Saturday afternoon.

It is worth noting that Norwich had a winless start to this season. After opening the season with three winless outcomes, they have evolved into an excellent shape by securing wins in all the previous four fixtures.

Dean Smith can be also thrilled by his team’s offensive line as they have scored a total seven goals from the past four rounds of Championship fixtures.

Meanwhile, Coventry recorded yet another winless outcome in the past match-day. They lost to Hull 3-2 on the road. A brace from Godden wasn’t enough to balance the hat-trick scored on the other side by Hull’s Estupinan.

Going on, the English forward is on a streak of scoring goals. Godden slotted in three goals from the past two Championship games. His goal stat seems to be the only positive thing Coventry follows consistently of late.

The Canaries are on a four-game winning streak in the Championship. Most importantly, they have a 100% unbeaten rate at home this season. They also own a superb head to head record over this foe for the past several years.

On the other side, Coventry follows a three-game winless streak on the road. Do also mote that, they had let in a total of six goals in the previous two road trips. As mentioned earlier, we can expect a goal from their forward.

Considering these observations, we are expecting a win for the hosts Norwich on Saturday.