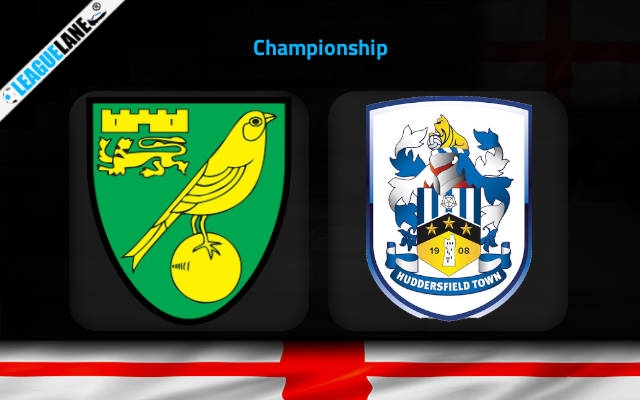 Norwich City are heavy favorites when they host Huddersfield on matchday 4 of the EFL Championship.

The Canaries had a poor start to the season and Dean Smith will be aiming for a change in fortunes on Tuesday night.

They are totally capable of dominating in the final third of the pitch, but finishing remains a major area of worry. Despite creating 22 and 18 chances, they drew 1-1 to Wigan and lost 1-2 to Hull City.

Huddersfield on the other hand got out of jail in the weekend clash against Stoke City. Late strikes gave them a 3-1 win, the first in the current campaign after losing 1-0 to Burnley and 2-1 to Birmingham.

Three points from the trip to Carrow Road is of big significance for Huddersfield as they want to be among the promotion candidates after losing play-offs last season.

Norwich bagged one of the biggest victories in Championship’s history when they hosted the Terriers at this ground in 2021. The win came by 7 unanswered goals to complete the double having edged a narrow 1-0 win at the John Smith’s Stadium in the early days of the corresponding season.

We expect an attacking game when these two take the field at Carrow Road on Tuesday night. Despite bookies placing Norwich as heavy favorites, punters must be vary for the Terries coming on the back of an excellent win against Stoke City.

Their inability to keep clean sheets prompt us to take btts as the first pick for this match and the desperate situation to aim for a win gives the perfect reason to take a shot at the over 2.5 goals bet.