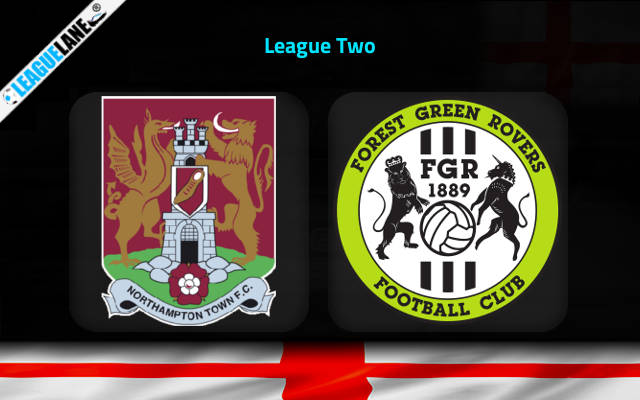 In game week 27 of League Two, Northampton Town faces Forest Green Rovers for their next match on Saturday at Northampton.

Third positioned Northampton Town has earned 40 points from 23 matches. The team has lost in their last match against Crawley Town. The match ended with 0-1 FT score. They are a team who can’t be taken lightly because of a few wins in their recent matches. They can hop back into their form at any time and give their opposition a tight match. From the last ten matches, the team has scored in nine of them and has also secured wins in six of them.

Forest Green Rovers are a tough opposition for every team in this season. They stay in the league’s top, 9-points ahead of the runners up. The team has 51 points from just 23 matches. With the win in the last match against Colchester United, their unbeaten streak has gone up to 12 games in the league matches. They also have kept clean sheet in the last three consecutive matches as well. The team has performed extremely well in this season to stay on top with such a points difference and they have scored in almost all their matches as well.

Rovers have played 11 away matches so far in which they have not lost in a single match. They have scored in ten of the matches and have kept clean sheets in four of them as well. Last three matches have seen Rover scoring over two goals in the match.

The match is sure to be a tough one for the teams. Northampton plays in their home ground and has scored in most of their matches. However, the first placed Forest Green is a tough competitor. They have an unbeaten record in their away matches and will look to keep it up. Also, Jamille Matt is exhibiting a great performance this season for the team. He has scored five goals from an equal number of matches.

The match will probably end in a win for Forest Green or in a draw. Both teams have a tendency to score in the matches and do so in the next match as well. There is also a good chance of Jamille Matt scoring at any time in the match.