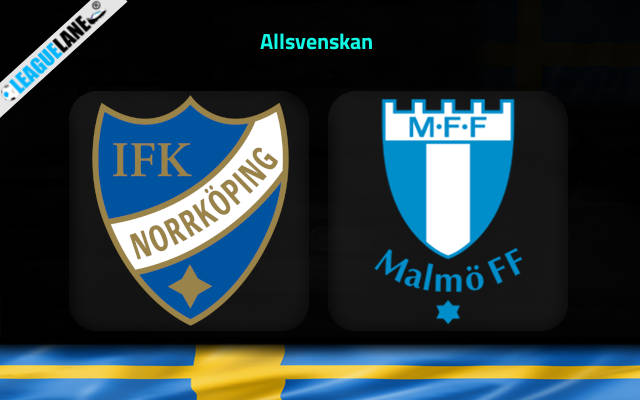 Round 14 of Allsvenskan is set for this weekend as Norrkoping play host to Malmo where both these sides differ by 8 points and are separated by 5 places. The Working Class Derby is scheduled at Platinumcars Arena, this Saturday.

The reigning champions are at the 5th spot on the standing with 24 points from 14 games. They won 7 times in the league while having drawn thrice and have lost on 4 other occasions. It’s possible we will see a couple of goals here, with the last 8 games for Malmo ended with 2 goals or more being scored.

Malmo defeated Vikingur Reykjavik by 6 goals to 5 on aggregate in midweek and the current champions have begun to cut-loose after under-performing their expected goals throughout the campaign.

On the other side, Norrkoping resides at the 11th position on the table with 16 points. Of the 13 matches played, they won and drew 4 games each while having lost on 5 other occasions. They have seen 4 of their last 5 competitive and non-competitive matches end in draws and are currently in the quest to find all 3 points.

The hosts will play in this game following on from a 1-1 Allsvenskan stalemate against Degerfors. They have seen their defence breached in all of their previous 6 clashes, giving up 9 goals on the way.

Four of their last 6 league meetings have ended in stalemates, including their last Allsvenskan encounter. Malmo have not registered a win against this rival in games played away from home for the previous 4 league games. But, It’s likely that they FF could score today, as they have netted 12 goals in the last 5 games.

Meanwhile, Norrkoping have not won in the last 5 league games coming into this, with 3 draws and 2 defeats. Things have also not been going that well in front of goal for them recently, with the side failing to score in 2 of the last 5 games.

We feel that a draw or win for Malmo is up for cards as most of their h2hs have ended no result.