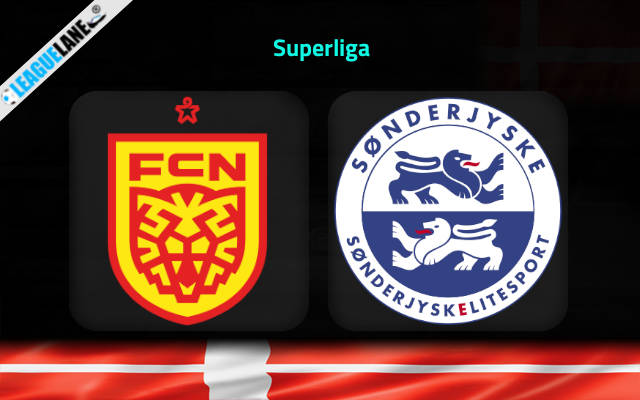 With 8 points and a single place apart, Nordsjaelland will be hosting the rock bottomed Sonderjyske at Right to Dream Park, this Friday.

Nordsjaelland are at the 10th spot with 22 points from 24 games. They won 5 times in the league while losing on a dozen other fixtures. The hosts are without a win since the last 4 games in the league with losing twice of them. They are only 4 points safe from falling into the relegation zone and has a dreadful defense.

The hosts prepare for this game coming off the back of a 2-2 league drawn match over Aarhus. They have been scored against in 5 of their previous 6 clashes, letting in 8 goals on the way.

On the other hand, Sonderjyske resides at the rock bottom closing the 12th position on the table with a mere 14 points. Of the 24 matches played, they won only twice in the league while drawing 8 times and losing on 14 other occasions. Their total goals to conceding ratio stands at 20:45 which is the worst in Superliga, showcasing their pathetic lineup.

Last time out, Sonderjyske drew 2-2 in the Superliga tie with Odense. It has been over 10 games back since they have last seen a victory on any competition and their last league win was recorded 6 months back. They have been scored against on all of their last 6 games giving opponents 9 goals in all.

The hosts have not been beaten in the league by Sonderjyske in their last 3 games. Nordsjaelland are also without a home win in the past 8 league matches and have been drawing the last 3 home games in a row.

Meanwhile, Sonderjyske are without a win away from home in their last 12 matches in the league. They have also been denied a win since the last 6 h2hs played on road.

We feel that a home win is likely to occur against this relegation battling visitors.