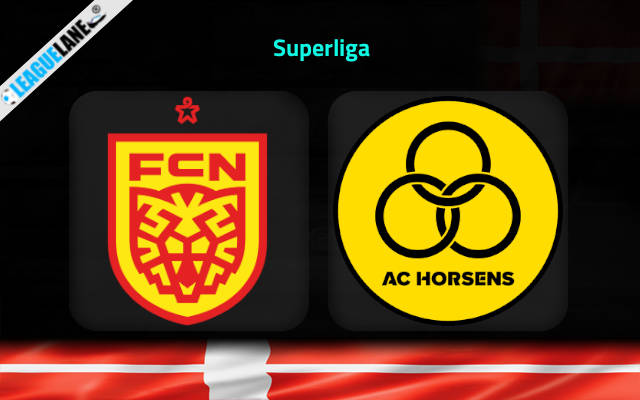 There is no denying that Nordsjaelland are one of the best teams in the Superliga this season. They will face Horsens at Right to Dream Park on Matchday 15. Both teams are separated by ten points ahead of this fixture.

Flemming Steen Pedersen’s team remains at the top of the table with two wins in their last four matches. Most recently they defeated Randers by 2-0. Adamo Nagalo was given a red card at the half-hour mark in that game. This is the second consecutive time that the team have picked up a red card.

It is interesting to note that both teams have won their most recent outing respectively. For Horsens, the victory was against Silkeborg.

This is their first victory of this month. In that game they did have an advantage as Silkeborg were down to ten men after the 48th minute.

The new trend is that manager Jens Berthel Askou is changing his team’s playing formation lately. In the game against Silkeborg he tried a different approach and it yielded him an important win.

For the host the plan is not to lose any further points as they have won only two of their last five games.

The first tip for this game is that The number of goals in this match will be between 2-3 – the odd for this tip will be at 2.00. This is after considering that in that in two of last three meetings the number of goals have been in the range of 2-3.

Our second tip for this game is that Nordsjaelland will win this game- the odd for this tip will be at 1.65. The host are on a four-game unbeaten streak in the league. Not to mention that Horsens have lost four of their last five away fixtures.