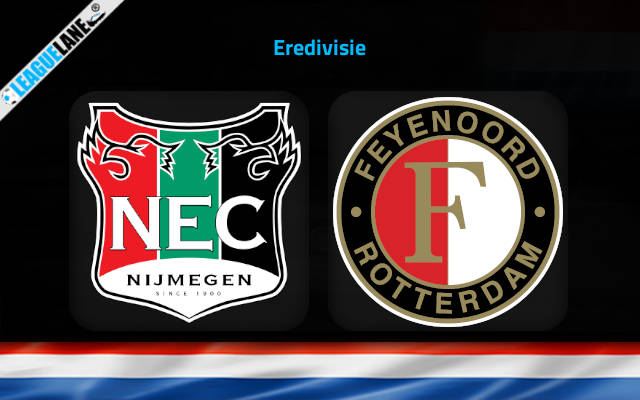 Manager Rogier Meijer is in disbelief as his team are on a five-game winless streak. No other team is having such a record this campaign. They will most likely have a difficult ninety minutes against Feyenoord this weekend.

The last time NEC won an Eredivisie fixture was on the 14th of August. Since then, they have not won any game. However, the only positive aspect is that they have lost only a single match this season.

Most recently, they played a very defensive game against Utrecht. The game ended in a goalless draw. Moreover, Utrecht managed to find seven shots on target yet they could not score.

Meanwhile, Feyenoord lost their most recent league outing against league leaders PSV. It was a thrilling game as the scoreline was 4-3 at full-time. All three goals were scored by different players for Arne Slot’s side.

This narrow defeat resulted in the breaking of the four-game winning streak for Arne Slot’s team. Moreover, it was their first defeat of the season as well.

Do also note that Orkun Kökçü is on a two-game goal-scoring streak.

The visitors are on an excellent goal-scoring streak. They have scored at least three goals in their last four consecutive league outings. As a result, the goal-scoring rate is at 2.86 goals per game.

It is interesting to note that the home side have finished 71% of their league outings in a stalemate. Moreover, they are facing a goal drought this month as they have scored only twice this month.

Our first tip for this game is that Feyenoord will win this by 4-1 – the odd for this tip will be at 21.00 odd. The visitors are on a five-game unbeaten streak against this team. Also, they have won the last three consecutive matches by scoring at least four goals.

Moreover, the next tip is that Both Teams to Score -the odd for this top will be at 1.61. At Goffertstadion, both teams have scored in the last four consecutive matches. A combined total of eighteen goals have been scored in those four matches alone.