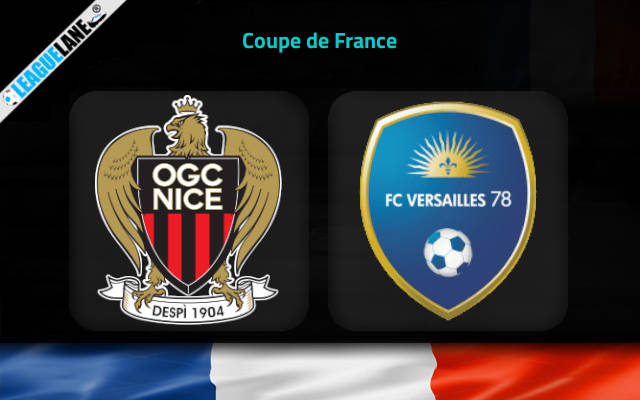 Nice have been enjoying a great spell of form lately. They have advanced it into the semi finals after defeating the French Giants PSG in the knockout stage and Marseille in the Quarter finals. They have been emerging victorious in most of their past fixtures and hence, they will be entering this Coupe de France Semi-Finals fixture with highest of spirits.

Nice have been also enjoying a good form at home lately. They have won four of their past five home fixtures across all competitions. On top of that, they defeated Marseille at this venue scoring 4 goals against them in the previous round.

On the other side, Versailles will enter this fixture from the top spot of the National-2 Group A table. They have been enjoying a pleasant form in the league but such a run will count little against Nice as they both have Gulf difference in quality.

However, we can expect them to display a strong match as they have managed to record win in every Coupe de France fixtures this season. With their current form in their respective league, we also expect them to enter the score-sheet for at least once.

By the looks of things, we expect Nice to pass this round of Coupe de France when they play Versailles in the Semi-Finals on Tuesday at Allianz Riviera.

Nice will enter this fixture after their Ligue 1 home victory against Angers by scoring one unanswered goal. They sits third on the league table with their current form. They have a good attacking side and a strong defensive side.

Versailles are unbeaten on road since November 2021. But we can’t predict a win for them on the back of such a run.

Considering all the above facts, we expect a win for Nice. We also back the Both teams to score option analyzing their capabilities of scoring .