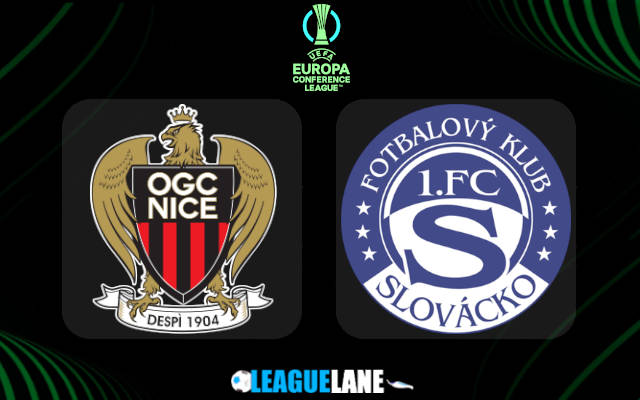 The most competitive group in the Conference League is arguably Group D. As the top two teams have had identical form since Matchday One. Slovacko will aim for their first win as they will travel to Allianz Riviera to clash with Nice.

In the first leg, Nice won by a narrow 1-0 margin. It was Nicholas Pepe who scored in the second half of that game. An away win is always important for any team playing in the Conference League. This is what Lucien Favre expected in the first leg.

Looking at the visitors, the team managed by Martin Svědík started their Conference League campaign by settling for a 3-3 draw against current Group D leaders Partizan. It has to be mentioned that they have conceded the maximum number of goals in Group D.

Nice remains unbeaten along with Partizan. This game is very crucial for Lucien Favre’s side as they will have an opportunity to take the first position.

He will be worried about Marcin Bułka who received a yellow card in the first leg. It is highly unlikely for a goalkeeper to be booked in the Conference League. Hence, he will have to be cautious.

Nevertheless, in the second leg they will have the advantage of playing in front of their home supporters.

Jan Kalabiška is the most important player for Martin Svědík’s side in the Conference League. He has scored three goals since Matchday One.

Manager Lucien Favre will be concerned about his team’s home record this season. As they are yet to win a group-stage fixture at home.

Therefore, our prediction is that Both Teams to Score in the Second half – the odd for this tip will be at 3.75. Slovacko scored five goals since the opening game, out of which three goals were scored in the second half. Moreover, in the first leg the goal was scored in the 54th minute.

Also, our next tip for this game is that the Number of goals will be between 2-3 – at 2.00 odd. From Matchday One, the visitors have scored in the range of 2-3 goals, Also they host most recently scored three goals at home in their domestic league. We can expect the range to be between 2-3.