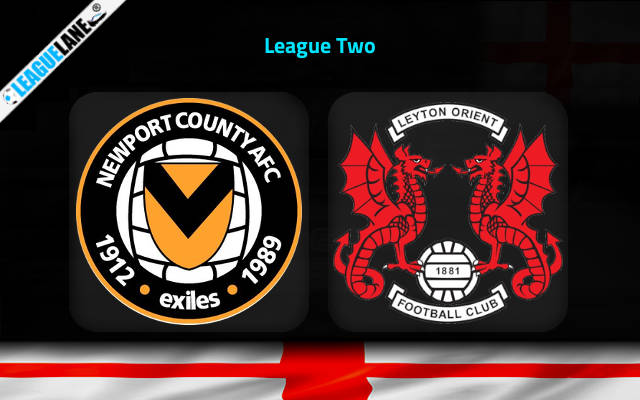 Newport vs Leyton Orient Predictions and Free Tips from our expert tipsters when the teams go head-to-head in League Two on Friday, 30 December 2022.

League leaders Leyton Orient managed to win one point from their goalless draw against rivals Stevenage. They will aim for their seventeenth win of the season as they will face Newport.

On the other hand, Newport are on a two-game losing streak at home. They lost to Doncaster in their last match at Rodney Parade.

The host are on a two-game winning streak against this team. They have won on all two occasions this year.

The last time the visitors won this fixture was over a year ago.

Who will win the match between Newport and Leyton Orient?

Leyton will likely win this fixture, despite losing earlier this year against this team. They have made tremendous progress in the league. They are currently on a five-game unbeaten run and will most likely end this year on a win. Not to mention that they are the table toppers.

We can expect over 2.5 goals combined. In two of the last four meetings at Rodney Parade the game ended with at least three goals being scored.

Both teams have scored in three of the last five overall matches. Also, they have both scored a combined total of ten goals in those matches. Therefore, the chances are high that both teams will find the back of the net this time as well.

The host have lost three of their last five home matches. Not to mention that Leyton have dominated this fixture at Rodney Parade. We can back the visitors to win this fixture as their opponents have lost 50% of their matches till now.

Therefore, the first tip is that Leyton Orient will win this game – the odd for this tip will be at 2.45 odd.

Our second tip is that Over 2.5 goals with Both teams to score – at 2.62. Both teams have scored consistently in two of the last three overall meetings. Scoring a combined total of seven goals in that process.