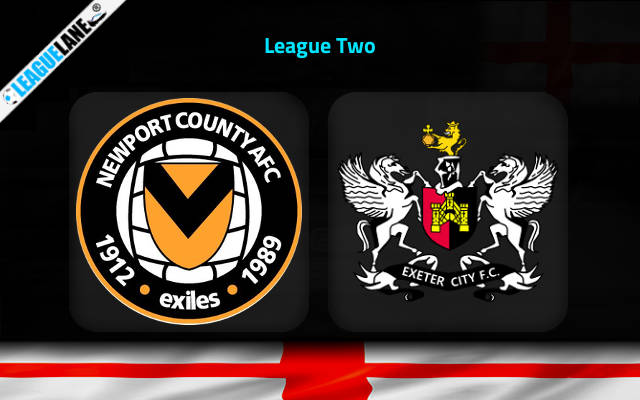 With only 4 points less than Forest Green, the second placed Exeter will face Newport who are in the Play Offs zone. The two go h2h at Rodney Parade this Saturday.

Exeter is in the 2nd spot on the standing with 68 points from 38 games. They won 18 times in the league while drawing on 14 and losing on 6 other occasions. Momentum is really building for them as they have now gone 6 games without losing. They have also won 3 of their last 5 games.

Exeter City go into this game following a 2-1 League Two win over Stevenage in their recent match. A run of resolute performances from their defensive unit has seen the number of goals they’ve conceded standing only 3 from their past 6 outings overall.

On the other side, The County resides at the 5th position on the table with 63 points. Of the 39 matches played, they won on 17 games while drawing a dozen and losing on 10 other occasions. They have kept 3 clean sheets in the last 5 games, conceding 4 goals during this period.

Newport head into this fixture after a goal-less League Two draw over Bradford City. The home side has scored in the last 8 games in front of their own fans. Meanwhile they have failed to net in 3 home matches this season.

Newport have not been beaten in the league by Exeter City in their previous 3 matches. They are also winless against the Grecians in their last 5 matches in the league.

Exeter are left without a victory over the County in games played away from home for the previous 4 league games. They however remain undefeated in their previous 2 away league fixtures.

We feel that an away win or draw is the best option since their last 6 h2hs has been that way. Also, Exeter remain undefeated in 78% of the games played on road this season.