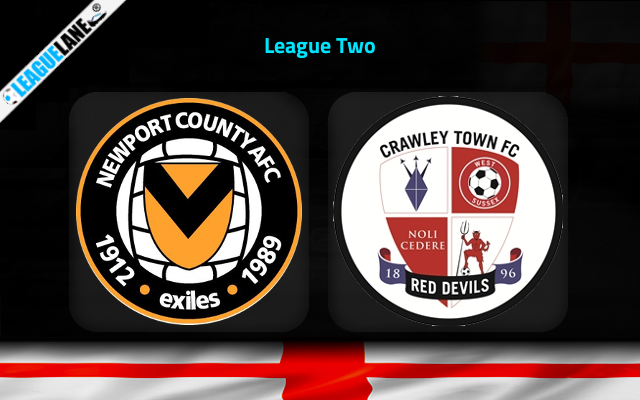 Newport vs Crawley Predictions and Free Tips from our expert tipsters when the teams go head-to-head in League Two on Monday, 2 January 2023.

The second half of December did not work out well for Crawley as they lost two back-to-back games. They are currently a few points above the relegation zone and will face rivals Newport for their first game of the year.

Newport managed to stop AFC Wimbledon on Boxing Day in a 1-1 draw. Last month they picked up three crucial points against Crewe which helped them reach the eighteenth position.

Both teams met two times last year and the visitors won on all two occasions.

It is worth knowing that at Rodney Parade, the visitors created a record as they won their first game in five years. Also, the last time the host won this fixture was back in 2021.

Who will win the match between Newport and Crawley?

The visitors will most likely take all three points from this game. The main reason is that they are on a two-game winning streak against this team. At the same time, the host have lost three of their last five matches at Rodney Parade.

The visiting team have scored at least two goals in their last two wins against this team. This time it is likely that the same trend will carry on.

Despite being at the bottom half of the table, the visitors are in decent goal-scoring form. Both teams have scored in the last three consecutive meetings. We can expect the same pattern to follow up this time as well.

The visitors are unbeaten in the last three head-to-head encounters. Also, they won this fixture at Rodney Parade last year. You can back the following as our first tip is that Crawley will win this game– the odd for this tip will be at 5.00 odd.

Furthermore, our second tip is that Both teams to score – at 1.90. Both teams have scored consistently in this fixture at Rodney Parade in the last three years with only one exception.