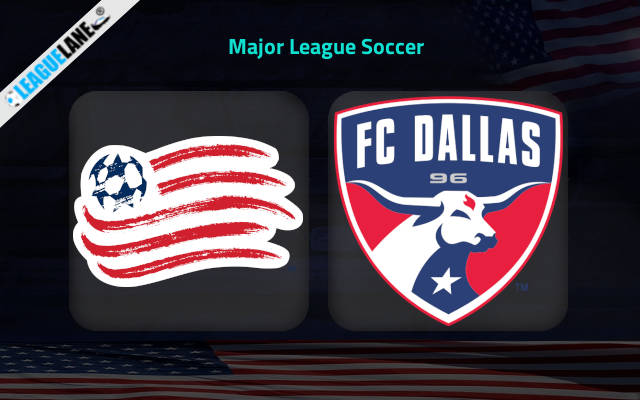 After a stepping up in 2021, the New England Revolution are looking forward ahead of this new MLS season. Although they slipped out of the Playoffs in the first hurdle, the Revs won their first ever Supporters’ Shield title with an MLS regular season point record.

FC Dallas had an awful season last year and they have been hard at work rebuilding for this new season. Both the sides drew their opening fixture and are about to go h2h at Gillette Stadium on Saturday where Dallas will be visiting the Revs.

The Revs won 4 or more consecutive games on 3 different occasions last season, while they didn’t lose back to back games at all. They sealed their Playoff spot last season, then turned onto winning the Supporters’ Shield. After that, all focus was on setting the regular-season points record.

New England drew their first game this season against Portland Timbers by 2-2 where a careless defense in the second half caused them their first win this season. They gained a point and are 6th in the Eastern Conference.

The Texas side finished 11th in the Western Conference last year, only ahead of state rivals Austin FC and the Houston Dynamo. Their miserable last season saw the side to concede most goals in the Conference and ultimately Luchi Gonzalez was replaced by new manager, Nico Estevez.

FC Dallas had a 1-1 stalemate against Toronto FC last week which gave both sides, a point to display on the table. Burn couldn’t keep up with an early lead and a disallowed goal combined with an opposition equalizer settled the match for a tie.

Previous matches between the two has averaged 2.38 goals while BTTS has happened 46% of the time. We envisage a home win as, New England’ s front row are remarkable at finding the ball in the back of the net and a home advantage further add up their chances.