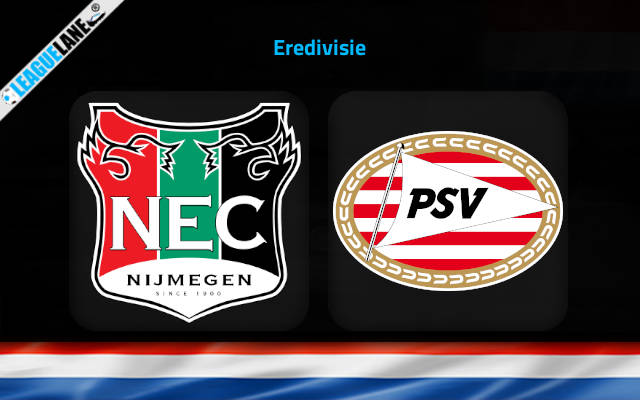 Nijmegen have been way too easy to break down against much weaker rivals in the last couple of fixtures. They are now up against the second-best attack in the division and we are not quite optimistic regarding their chances of a positive result here.

PSV will continue the pursuit of Ajax and Feyenoord at the top two spots in the Eredivisie standings on Sunday evening when they travel to Gofferstadion to take on bottom-half NEC Nijmegen in the last fixture of the 16th round of the competition.

The visitors are currently only two points shy of Ajax atop the league ladder. They have been enjoying a strong spell of form lately with four wins and a draw in the last five rounds.

Head coach Roger Schmidt has plenty of reasons to be satisfied with his men’s attacking performances of late.

PSV bagged four goals in an easy home win over Utrecht last weekend. They have scored four or more goals in three of the last four Eredivisie outings.

The team from Eindhoven should have plenty of room to keep delivering up front here against NEC Nijmegen who have been terrible defensively in their latest games.

The hosts are winless in four successive league outings. They will go into this off the back of two defeats to the likes of Cambuur and RKC Waalwijk.

The fact that NEC Nijmegen shipped five goals in the last two matches against these rivals is certainly worrying for manager Rogier Meijer ahead of the clash with free-scoring PSV Eindhoven.