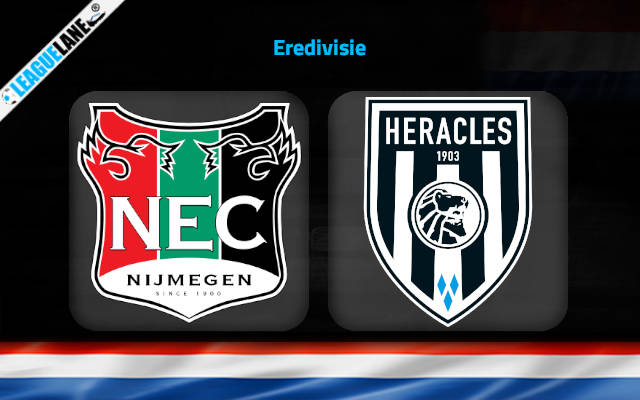 Heracles managed to avoid defeats in back to back games following a disastrous run of games as the club went into the New Year break.

NEC Nijmegen meanwhile managed to finish off 2021 on a high by registering two consecutive wins.

These two clubs are set to compete for the first time in 2022. This fixture is set to kick off at the Goffertstadion this Saturday evening.

Nijmegen won their most recent fixture against Willem II on the road. Magnus Mattsson scored the only goal of the fixture.

This marked the club’s third consecutive win across all fixtures. With two wins and three losses from the last five games, the club is now 9th in the league, seven points clear of their opponents this weekend.

Heraclieden managed to hold Cambuur to a 1-1 draw at home in their most recent fixture. The match was preceded by one win and four losses.

Thus gaining five points from the last six league fixtures the club occupies 13th position in the table and are five points clear of the relegation zone.

The hosts have managed a point on average in the previous four home fixtures. While that is nowhere close to impressive it is considerably better than the visitor’s form who are on a 7 match losing streak away from home. Hence I have picked a home win for this fixture.

Heracles has not scored more than a goal in the last five away fixtures and have done so only once in this season. I do not see them scoring more than once in this fixture.