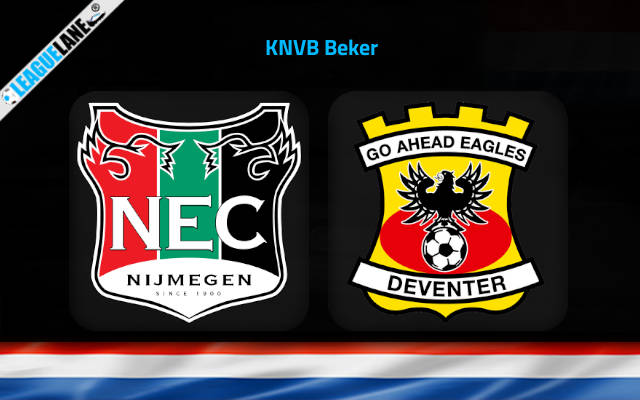 Go Ahead Eagles will be at Goffertstadion on Sunday for the Eredivisie showdown with hosts NEC Nijmegen.

It took five Eredivisie fixtures for Go Ahead Eagles to seal their maiden victory in this season. Their performance have gone uphill since then. They are following four back-to-back unbeaten games at the moment.

Following a run of unbeaten matches, they have climbed up to the 13th spot in the league standings. They were inside the danger zone before having the above mentioned unbeaten run.

It is worth noting that the Eagles have conceded 17 goals in their 10 league fixtures. This shows that they are having a tough time with their defense.

Aside from Eagles’ poor form mentioned above, Nijmegen doesn’t have any impressive stats to put forward for a win. They are currently two spots above their counterparts.

Eagles own an average defense while they have an offense that has nothing to display for an impression. Apart from that, the team has not been able to win in the last 8 games.

Out of these wight games, seven were drawn fixtures. It also includes games that had drawn due to the poor performance from their offense.

By the looks of things, expect a tight encounter between these two on Sunday.

Rogier Meijer’s men head into this fixture with a draw in their last four home matches. Sunday’s Eredivisie fixture will be a golden opportunity for them to unravel this tangle of spoilers.

Looking at the head to head form of both the sides, there is a high possibility that it will be low-scoring match. Considering all these observations, we expect a victory for the home side NEC Nijmegen on Sunday.