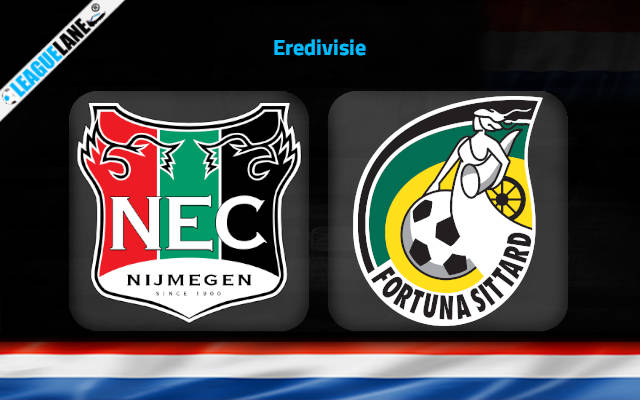 Fortuna Sittard is in the relegation zone and they will be desperate for win here as they take a roadtrip to Nijmegen. NEC is set to host them at Goffertstadion this Sunday for the last game of the season.

NEC is at the 8th spot on the standing with 38 points from 33 games. They won 10 times in the league while drew on 8 and lost on 15 other occasions. The hosts need a win here to maintain their last spot alive for the Conference League Play offs. The are also tally on points with Heerenveen who are just below them.

NEC will be looking to improve on their last outing here following a 3-2 league losing effort in their last game against PSV Eindhoven. They have failed to prevent opponents from scoring in 5 of their previous 6 clashes, shipping 8 goals on the way.

On the other hand, Sittard reside below at the 16th position on the table with 32 points. Of the 33 matches played, they won 9 times in the league while drew on 5 and lost on 19 other occasions. They have been winning and losing games in an uneven manner and that made them to plummet into the relegation area.

Fortuna lost their previous game by 1-2 against Vitesse. Over the course of their previous 6 outings, they have helped themselves to a tally of 9 goals while having also scored on each one of those occasions.

Fortuna haven’t won against NEC when they’ve played them away from home in the last 4 league games. But they remain undefeated in their last 2 league matches played away from home.

Meanwhile, NEC Nijmegen remain unbeaten in the league by Fortuna in their previous 7 matches. But they have the poorest home wins this season, winning only thrice from the 16 games played at Goffertstadion.

Since the hosts are poor at home and the visitors remain meagre on road, both these sides are equally weak. But we feel that a narrow win for NEC this up for cards this Sunday.