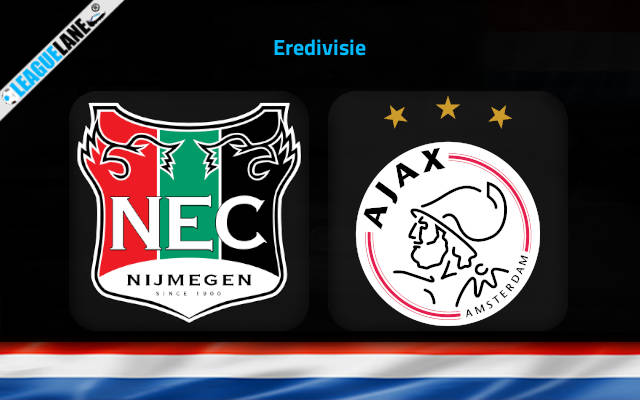 The World Cup break has come just a the right time for Ajax. The reigning champions run into a big crisis in November, going three successive games in Eredivisie without a victory.

This streak dropped them to the second position in the league standings. Ajax are currently three points behind Feyenoord at the top of the ladder and they will be extremely motivated to return to winning ways after the World Cup break.

The first upcoming challenge for them is the clash against NEC Nijmegen on Sunday afternoon at Goffertstadion.

The hosts should enter the tie in much higher spirits after claiming back-to-back victories in the previous two Eredivisie rounds. Nijmegen broke into the top half of the standings after the mentioned wins.

Interestingly, Rogier Meijer’s men have just one defeat in seven league outings on the home patch this season, five of which they have drawn.

On a negative note, the team did not look great defensively in the recent mid-season friendly against Emmen. The fact they shipped three goals to Emmen is not encouraging ahead of the clash against the deadliest attacking line in the country.

Ajax bagged five goals in each of the back-to-back victories over Volendam and Telstar in December.

Knowing how motivated the visitors will be on Sunday, there is nothing else but a comprehensive away win that we could suggest from the betting perspective here.

Ajax did have three successive slip-ups in Eredivisie in November but they still have a star-studded squad (Tadic, Kudus, Brobbey, Bergwijn, Berghuis, etc.) and the best attacking record in the league.

Knowing how motivated the visitors will be on Sunday, we will back Ajax to win by at least three goals difference at the odds of 3.30. We also like the 2.50 odds offered for Ghanaian star Mohammed Kudus to score anytime.