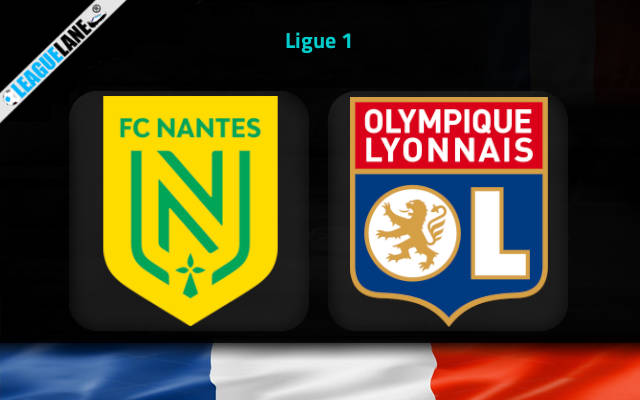 Nantes vs Lyon Predictions and Free Tips from our expert tipsters when the teams go head-to-head in Ligue 1 on Wednesday, 11 January 2023.

Lyon uncharacteristically have been finding it hard to break into one of the top-four spots in the French top flight. They hope they can turn around their campaign in the second half of the season. They surely are thrilled about this upcoming encounter, considering the superior h2h record they enjoy over this opponent.

Nantes have managed to win just thrice all through the campaign, and it is no wonder that two of these victories came against teams currently placed in the relegation zone. It goes without saying they are easily one of the worst in the entire league.

As mentioned earlier, Lyon have a thoroughly dominant h2h record against this foe. In fact, they are on a five-game winning streak against this opponent, and this extends back three years.

It is also noteworthy that their offense were on fire in such clashes over the past few years. To put it precisely, they managed to score 13 goals from the last five such encounters.

Who will win the match between Nantes and Lyon?

Now Lyon might not be in full swing yet, but they are determined to have a much better second half for their campaign. They will consider this upcoming fixture as a great opportunity to deliver a confidence-boosting win.

Nantes have performed quite poorly in h2h clashes in the past three years, and their overall form in 2022-23 has been anything but great. Lyon easily have the upper hand this Wednesday.

Lyon have turned up the intensity of their offense quite admirably after the World Cup break. They scored two or more goals in two of their past three overall fixtures, and they found the back of the net four times in their latest away match-up.

Moreover, they have a habit of scoring in plenty against this opponent too. Expect quite a number of goals this Wednesday.

Nantes are at home after all, and they have not failed to score in a fixture at this venue since October. In addition, Lyon are yet to keep a clean sheet on the road in any competition this whole season.

Chances are high that both teams will slot in goals this game week.

Lyon will count on their five-fixture winning streak against this rival a lot. They also are high in confidence due to Nantes having won just thrice so far in this league campaign.

This is a great chance for the guests to make a push for the top-most tier, and we can count on them to bring their A-game. As such, Lyon to Win at an odd of 2.40 seems to be a great pick.

As for the second tip – the visitors have not been consistent with their defense this season – and particularly so on the road. On top of that, Nantes have developed a habit of finding the back of the net at home.

For the reasons, the Both Teams to Score at 1.67 would be a logical second bet.