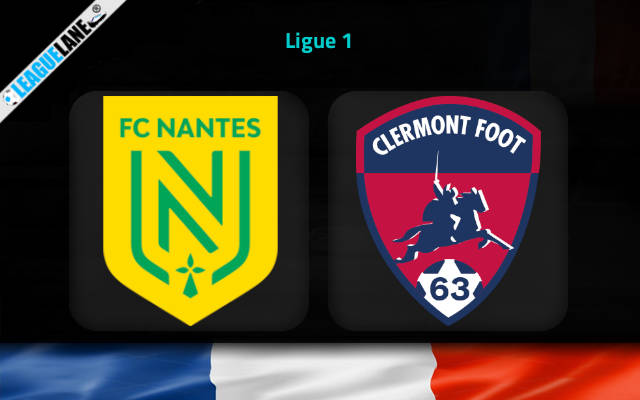 Nantes will play host to visiting rivals Clermont Foot in this Ligue 1 fixture on Sunday at Stade de la Beaujoire.

Going on, they have started off with a demotivating 0-5 defeat against the French biggies PSG at home. Since then, they won five, drew two and lost four to bag a total of 17 points for positioning at the 9th spot in the table.

Meanwhile, Nantes looks weaker than last season when they finished inside the first 10 of the league standings. The visitors started of with three winless fixtures.

High scoring victories over the likes of Brest and Toulouse are their only positive outcomes so far in this season. As a result, they were pushed down to sit at the 15th spot in the league standings.

It will not be a difficult task for Nantes to score at least one goal past the Clermont defense, which has conceded goals in the last six games. Apart from this reason to say that it will be a scoring game for both teams, there is the recent head to head form stats.

By the looks of things, we expect a highly competitive encounter between these two on Sunday.

Clermont will head into this fixture unbeaten in their last for away games. Two of those saw them scoring two or more goals.

Taking into account all these observations, we like to back Clermont Foot to Score Over 1.5 Goals at 2.75 Odds as the main bet for this one.