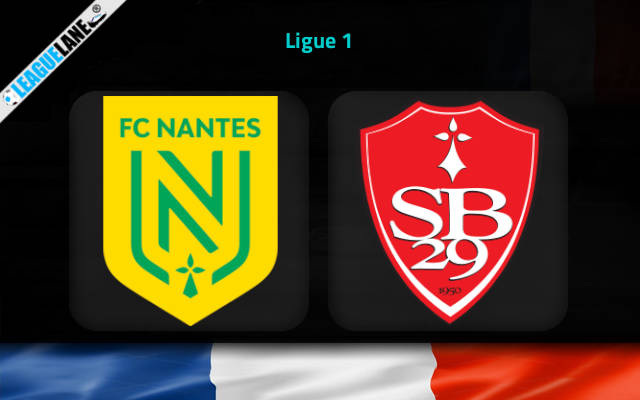 Not many experts predicted seeing Nantes and Brest at the bottom two spots of the Ligue 1 standings ahead of the 2022/23 season.

These bottom two outfits will meet each other in a huge game for both managers on Sunday afternoon at Stade de la Beaujoire – Louis Fonteneau.

Nantes won Coupe de France last season but are struggling badly at the beginning of the new Ligue 1 campaign.

They have won only one of the opening ten league outings and will come into this tie off the back of five defeats and a draw in all competitions.

Antoine Kombouare’s job is well on the line and a potential failure here against the rock-bottomed Brest would probably mean his farewell from Nantes’ bench.

Les Canaris are struggling on so many levels, both offensively and defensively. They suffered n easy 3-0 defeat away at Rennes seven days ago.

Things do not look much brighter for Nantes in UEFA Europa League either where they suffered successive away losses to Qarabag and Freiburg recently.

Brest’s latest failure came last Sunday when they dropped an early lead to suffer a 1-2 defeat to Lorient.

Bruno Grougi’s men now have three losses and a draw in the previous four league rounds. However, we must say that Brest did improve their defensive displays of late, shipping only a goal in four of the previous five league matches.

Both Nantes and Brest are struggling badly with the lack of attacking creativity at the beginning of the season. They will come across each other in a super-important affair on Sunday and we can hardly imagine a beautiful game of football on the occasion.

Nantes have more quality in their ranks and we believe they will eventually come on top. The Home Win & Under 2.5 goals FT is an ideal betting option here at the 4.50 odds.