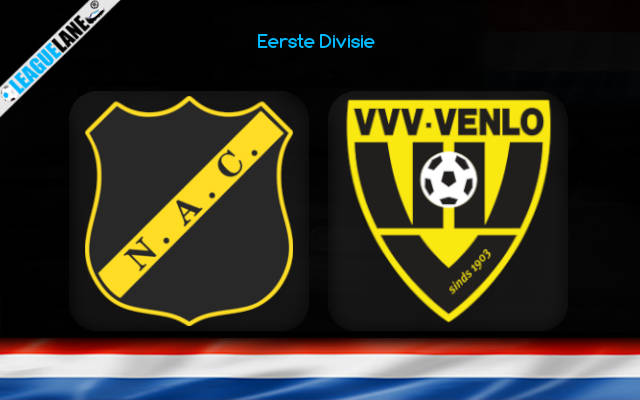 NAC will test Venlo’s defence this Friday at the Rat Verlegh Stadion. Both teams share the same points in the table. Also, they both are showing decent records in their last five outings respectively.

The host quickly bounced back with a victory against Jong FC Utrecht following an embarrassing 3-1 defeat to Jong Ajax. Against Utrecht, it was Albert Lottin who scored the opening goal. However, Edwin de Graaf ‘s side made a comeback.

This important victory helped NAC climb to the sixth spot on the table.

The visitors are not far behind this season. Both teams have managed to obtain fourteen points so far.

Nevertheless, Rick Kruys’s side are the only team on the table with a goal difference of nil. Most recently they snatched a point from Telstar. Sven Braken deserves all the praise as he scored the equaliser a few seconds from the full-time whistle.

It is worth knowing that both teams share a very similar pattern this season. The recent form shows that they both have won twice and two games have ended in stalemate. No other team have such similar traits in the league.

It is worth knowing that both teams share the same number of points, yet NAC currently occupies the sixth spot on the table. Moreover, Sven Braken is on a two-game goal-scoring streak.
It also needs to be noted that both teams have won 50% of the games this campaign.

Our prediction is that the Venlo will win this fixture – at 4.00 odd. This is after considering that in the head-to-head meetings the visitors have won two of the last six matches. Also, NAC lost to Jong Ajax by 3-0 earlier this month.

Moreover, our next tip for this game is that the first half will have the most goals – at 3.10 odd. In the last three meetings between both clubs, the most number of goals were scored in the first half only.

Looking at the most recent match, two goals were scored within the first twenty-five minutes only.