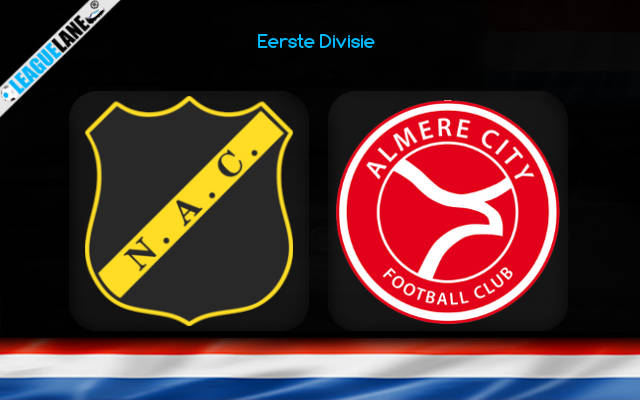 After a stunning victory against Den Bosch Almere City is ready to face their next opponents in their home ground. Almere City will travel to Breda for their next for their upcoming fixture in Eerste Divisie.

Almere City has achieved a win in the league in their last match against Eindhoven. Almere scored 2 goals in the match and the opposition could not score any goals, ending the game in 2-0 FT score.

Breda and Almere have a 10-point difference between them. Breda has a chance to play in the playoffs for promotion to Eredivisie if they secure wins in the upcoming match and climb up the table. They are just 2 points away from this chance.

NAC Breda has now played 4 games without losing to their opposition and the last 2 games were wins for the team. They have gained 26 points from 18 games in the Eerste Divisie.

The team has played well so far in their home matches. Their last home match was against Helmond Sport, which ended in 1-0 FT score in favour of the hosts. They currently have 6 wins from 8 away matches and have scored in every one of these matches.

Almere City is in the 17th position after their win against Eindhoven, with 16 points in the league table. The win from their last match will be a boost for the team to win in the following fixtures.

However, the opposition has not been in their best form when it comes to away matches. Their last match against Emmen ended with a loss for the team with 0-3 FT score. The team anyhow has scored in 7 of their 9 away matches.