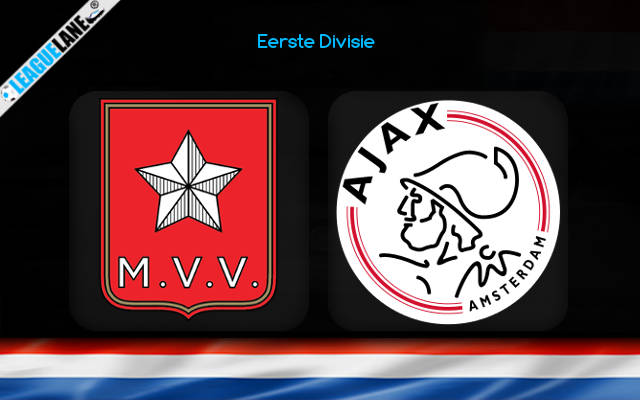 MVV Maastricht has had little luck with winning in their matches tis season. Their poor performance has affected their standing on the group table, placing them at the bottom of the league table. From the last ten matches, they have secured only two wins and two draws and the remaining six matches have ended in loss for the team. The team stands second from the bottom of the league table with only 34 points to their name.

MVV played against Jong PSV in their last match. Both teams scored two goals each in the match, ending the match in a draw with 2-2 FT score.

Jong Ajax has played well in their matches this season, locking a position in the playoffs of Eerste Divisie. However, they are not eligible for a promotion to Eredivisie because they are a reserve team. Currently, the team sits seventh on the league table with 62 points to their name.

Jong Ajax played their last match against VVV. Ajax scored six goals in the match while the opposition could score only one, ending the match in a win for Ajax Reserves with 6-1 FT score.

MVV will surely have a tough time when they play against Jong Ajax in the next match. Jong Ajax has played well in their recent matches and has lost in only one of the last six matches. MVV has played poorly in their home matches this season. The team has not had a win in their home ground since December 2021. Jong Ajax seems to be in a trouble with their form in the away matches. They are winless in their last seven matches.

Looking at the records, the match will most likely end in a win for Jong Ajax. Both teams have scored in their previous matches and can be expected to score in this match as well.