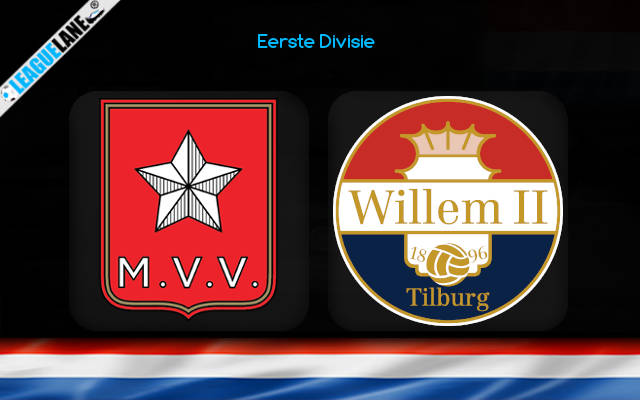 Both MVV and Willem are maintaining good form this season. They are currently separated by a single point on the table. A lot is at stake for both sides as they will clash at De Geusselt this week.

Following a heavy 5-0 loss against Eindhoven earlier this month, the host have regained their form. They are on a two-game winning streak this season.

They managed to defeat Dordrecht by 2-1 last time. Now the team is at the seventh position on the table. Two different players namely Jarne Steuckers and Nicky Souren found the back of the net in that game.

Meanwhile, the visitors are unbeaten in their last five outings. They defeated TOP Oss by a solid 3-1 margin last time in the league. Micheal de Leeuw notched a brace in that game.

It is interesting to note that, Kevin Hofland’s side scored all three goals before the half-hour mark in that game.

If Kevin Hofland’s side manages to secure a win in this upcoming fixture they can overtake rivals Eindhoven on the table ranking.

The visitors are unbeaten since the 12th of August. Also, they have lost only a single game this campaign. Moreover, they share the record of conceding the least number of goals this season with rivals Eindhoven.

At the same time, the host have conceded more than twice as Willem. Spectators will have a lot of expectations considering that both sides will be meeting after a long time. Moreover, both these teams have won four of their last eight respective matches

Our first prediction is that MVV Maastricht will win this game – at 5.00 odd. At De Geusselt the host have won two of the last three head-to-head meetings with Willem II.

Moreover, our next tip for this game is that Both Teams to Score – at 1.66 odd. Both teams have scored in the last five consecutive head-to-head matches.