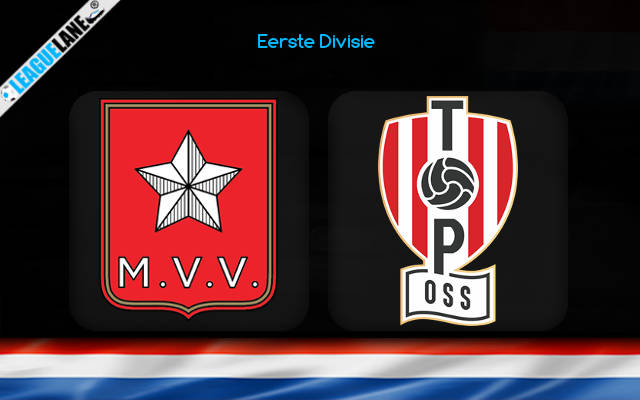 Neither MVV nor TOP Oss are enjoying a spectacular attacking form of late which is why we expect a tight game to be decided by a single goal on Friday night. That lone goal might well end up in TOP Oss’ net given that both form and recent H2H tradition favor the home outfit here.

Both teams will enter the match off the back of respective 1-1 draws in the previous round.

MVV shared spoils with Roda at home on Monday night, while TOP Oss had the same result against Telstar (also at home) last Friday.

While MVV did manage to snatch some odd wins of late, TOP Oss have really been struggling for results in the last couple of months.

The visitors will travel to Maastricht winless in 14 consecutive league games. They sit second from bottom in the league standings with just 3 wins in the opening 17 outings.

The main source of problems for TOP Oss is the lack of attacking creativity. They have failed to find the net more than once in the last three Eerste Divisie outings.

The team led by Belgian manager Bob Peeters managed to score only five goals in eight away outings this term, six of which they have lost.

Knowing that MVV won three of the last six affairs across competitions, we do rate their chances of clinching an important victory here against the out-of-form TOP Oss.

Only one of the last five games MVV played produced three or more goals.

MVV won four and drew one of the last five head to head encounters against TOP Oss.

TOP Oss are winless in 14 successive league games and currently sit second from bottom in the league table.

TOP Oss won one, drew one, and lost six of eight away fixtures so far in the season.

Tips for MVV-Maastricht vs TOP Oss