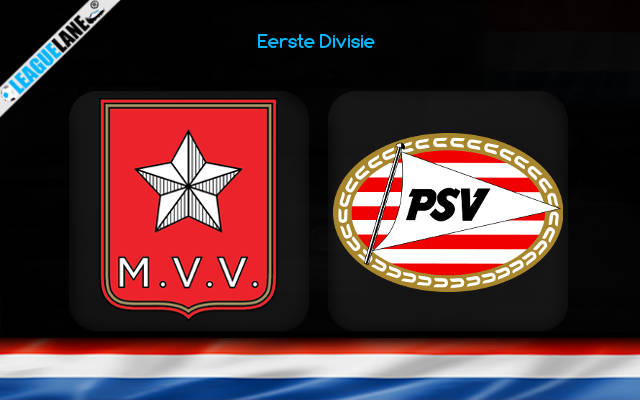 MVV, following on from their previous result, will be hoping for more of the same as they encounter their next fixture at home. From 3 win less games, the PSV reserves take a road trip to De Geusselt on Friday to snatch all the three points off the table.

Of the 15 matches played, MVV won 7 games with 21 points and reside at the 11th spot on the table. They lost 8 fixtures while no games ended in a draw.

They either win or lose in the consecutive manner often questioning their unstable nature. They won 3 of the last 5 matches, with a recent victory was over Almere by 2-0.

Jong PSV have 19 points from 16 matches. They secured the 13th spot with 5 wins, 4 draws and 7 losses. They don’t score in plenty but the rate of conceding goals is 2 more than than the ones scored resulting at 23:25.

MVV have drawn 4 out of the last 6 home matches against the visitors and they were also the first ones to get a card in the last 7 games.

43% of PSV II’s Eerste Divisie away games this season have seen both sides score before half time. Out of all h2h matches they played, visitors won 5 times while the hosts managed to win only 3 games.

On considering all their meetings till now, 50% of those clashes ended in a draw and only 2 of those fixtures ended in a goal less draw. Also both the teams have a clean sheet against each other.

We envisage that both the teams would score goal against each other but the result could be a probable draw at the end of final whistle.